Tracing Board from Union Lodge, Dorchester: Now on View
Admiral George Dewey Inspires the Autograph Collection of a Young Mason

Who Wore the Crown? Collecting Order of the Amaranth Materials 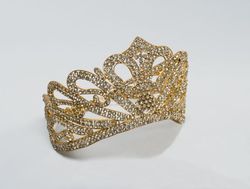 To properly manage the Scottish Rite Masonic Museum & Library’s collection, the curatorial staff periodically reviews the strengths and weaknesses of the collection so that, as we evaluate new gifts and purchases, we can fill gaps and avoid duplications.  One of the gaps that we are seeking to fill is material (2-d, 3-d, records and papers) associated with fraternal groups for women and children.  So, when a donor generously offered several gifts of Order of the Amaranth material over the past few years, we jumped at the opportunity (see these other posts about the organization). 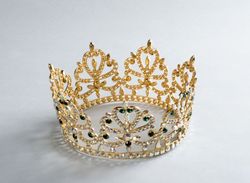 Among the large group of Amaranth items now in our collection, ranging from props that were used in rituals to records for several courts, and souvenirs from Amaranth events to regalia, are the two crowns shown here.  Both were worn by Elsie Haynes (1915-2006) when she was active in Amaranth activities in Connecticut.  Haynes probably wore the crown in the top photo when she was Royal Matron of Charity Court No. 17, which met in Windsor, Connecticut, and later in Suffield, Connecticut.  Haynes used the crown in the lower photo when she served as Supreme Royal Matron, head of the national organization, in 1977 and 1978.

We are very pleased to have Order of the Amaranth represented in our collection.  If you have an Amaranth memory to share or a question to ask, please leave us a comment!