New to the Collection: Medal Engraved for James Campbell 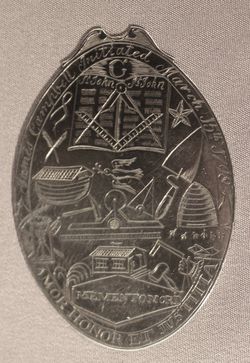 We are very excited to add this engraved medal to the Scottish Rite Masonic Museum & Library collection.  This type of personal Masonic medal, embellished with a variety of Masonic symbols and engraved with an owner’s name and his date of initiation, celebrated the wearer’s membership in a lodge.  Owners likely wore them during processions or at lodge meetings.  You can read about another personal Masonic medal in the Museum collection in a previous post.

Few engraved Masonic medals that date from the late 1700s and early 1800s come to the museum with much—if any—information about who owned or made them. Digging into the history of a medal like this one, originally the property of a man named James Campbell, and considering how this medal’s history relates to that of comparable medals in craftsmanship, style and iconography, can help us better understand it.  Along with Campbell’s medal, we received two handwritten notes that hinted at the names of  two previous owners of the medal.  One note also stated that Campbell had served as a private in the Revolutionary War.  Since James Campbell is a common name, even for men who served in the Revolutionary War, research into the family histories of prior owners was essential to helping us identify which James Campbell first commissioned the medal.  Born in Windham, New Hampshire in 1759, the James Campbell who orginally owned this badge, lived in Acworth, New Hampshire, and later Walpole, New Hampshire.  A farmer, Campbell also served as the Register of Deeds for Cheshire County, New Hampshire.   When he died in 1825, an obituary in a local paper recorded Campbell was “a man universally esteemed.  He has held the office of Registrar, by universal consent for about 20 years.”

Intriguingly, this medal is one of four very similarly engraved badges owned by different institutions: 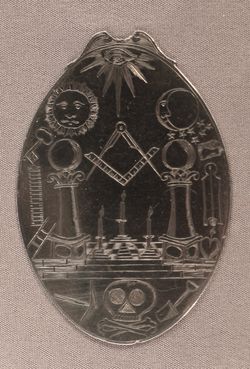 the Museum, the Grand Lodge of Masons in Massachusetts, the Grand Lodge of Iowa and the Henry Ford Museum.  Of  like size and displaying the same selections of emblems, manner of engraving and style of script, these badges appear to have been decorated by the same craftsman.  In addition to the names of their owners: James Campbell, Joseph Winslow, Joseph Williams and Roger Ransted, each medal also bears the owner’s initiation date.  These four medals were manufactured between 1796 and 1807.

Three of the medal owners, Roger Ransted (1769-1852), of Westmoreland, New Hampshire (and later, Thetford, Vermont), Joseph Winslow (dates unknown) of Putney, Vermont, and Campbell lived in the same part of the country on the New Hampshire and Vermont sides of the Connecticut River.  The craftsman who shaped and decorated these medals likely worked in the same area.  Membership records at the Grand Lodge of New Hampshire related to Ransted, Winslow and Campbell showed that they belonged to the same Masonic lodge, Jerusalem Lodge No. 4 of Westmoreland and Walpole, New Hampshire.  There is still more of this history to uncover—such as who engraved these medals.  If you know of any similar Masonic medals or have ideas about James Campbell’s medal, please leave us a comment or drop us a line.

Posted at 09:35 AM in Jerusalem Lodge No. 4, Masonic medals, Posts by Hilary Anderson Stelling | Permalink | Comments (0)