Lecture Series: Speaking of Maps: An Exploration of Cartography and History, Fall 2014
New to the Collection: Odd Fellows Gavel 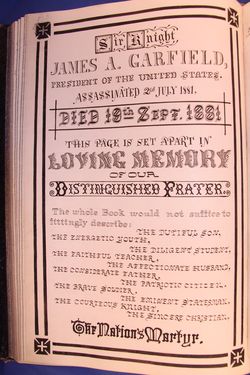 As I was flipping through a new acquisition, a minute book from the Hudson River Commandery No.35, I found a touching full-page tribute to President and Sir Knight James Abram Garfield (1831-1881).  His 1881 memorial is prominently displayed in the minute book (left) of this commandery from Newburgh, New York.  The page is written by hand in beautiful calligraphy.

On the date of September 27, at Newburgh,the minute book reads, "A communication, under date of Sept. 23rd, 1881 was read from the Grand Commander of the State of New York, announcing the death of the late President of the United States:--Sir James A. Garfield, and ordering appropriate draping of asylum and other proper notice of the sad event..."  After considering the communication from the Grand Commander, the Eminent Commander of the Hudson River Commandery No. 35 made a motion that a separate page be written and put in with the records in memory of Garfield.  It is a fitting tribute for a former President and Sir Knight.  The "draping of asylum" referred to the meeting place of a Commandery and means retreat or place of safety. The recommendations to place mourning drapery at the asylum were observed.  Such tributes were recorded all over the United States in Knights Templar, Royal Arch, and other Masonic Proceedings.

In addition to participating in Garfield's funeral, the Knights Templar of Columbia Commandery No. 2 had also accompanied Garfield during his presidential inaugural procession on March 4,1881.  Garfield gave a short inaugural address and lasted in office only a matter of months--from March until July 2, 1881 when he was shot by an assassin at a railroad station.  He died on September 19, 1881 from infection of the wound.

Being a Knight Templar, Garfield had many other Masonic affiliations.  Garfield was made a Master Mason in 1864 at Columbus Lodge No. 30 in Columbus, Ohio and lived nearby in Cuyahoga County.  He attended Williams College, taught classics at Hiram College, became a brigadier general during the Civil War, and then was elected by Ohioans to Congress in 1862.  During the time he was in Washington as a congressman, he was affiliated with Pentalpha Lodge No. 23, as a charter member in 1869.  He became a Knight Templar in 1866 at Columbia Commandery No.2 in Washington and received degrees 4 through 14° in the Scottish Rite in 1872 from Albert Pike(1809-1891) of the Southern Jurisdiction.

Doyle, Burton T and Homer H. Swaney.  Lives of James A. Garfield and Chester A. Arthur:  With a Brief Sketch of the Assassin. Washington:  R. H. Darby, 1881.

Posted at 09:00 AM in Columbia Commandery No. 2, Freemasonry, Freemasonry and U.S. Presidents, James A. Garfield, Knights Templar, Posts by Catherine Swanson | Permalink | Comments (0)