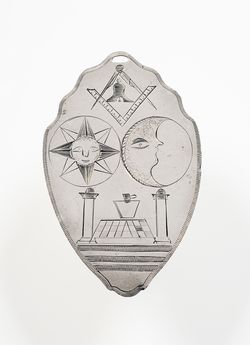 Every now and then, a researcher’s inquiry will inspire us to take a closer look at an object in the collection—recently this mark medal made for Erastus Spalding (1775-1830) of Scipio, New York.  It was added to the collection of the Scottish Rite Masonic Museum & Library a few years ago.

On his medal, formed out of thin sheet silver in the shape of a plumb bob, Spalding commissioned a craftsman to engrave text and symbols.  On one side of the medal (shown on the left), Spalding had several Masonic symbols along with a mallet and keystone, emblems related to the mark degree, engraved.  On the other side of the medal (shown on the right), for his mark--the symbol he chose to represent himself--Spalding selected elements taken from 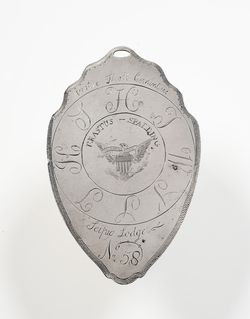 the Great Seal of the United States.  The seal, officially adopted in 1782, featured an eagle supporting striped shield. In one talon the eagle grasps an olive branch, representing peace; in the other the eagle grips arrows, to signify war.  From the eagle's beak a banner decorated with the motto E Pluribus Unum (out of many, one) flies.  Spalding also directed that a Masonic motto, “Virtue Shall Cement Us,” be incised on the medal, as well as the name of his lodge, Scipio Lodge No. 58.

Born in Connecticut, Spalding first came to Scipio with his parents and siblings in the late 1780s or early 1790s. Spalding’s father, Oliver (1739-1795) served in the Revolutionary War. Grants of land made to former Revolutionary War soliders may have drawn his family to the area. Erastus and some of his brothers seem to have owned land in Scipio after their father’s death (you can see their names near plot 138 on this map). In developing their new community, area men established Scipio Lodge No. 58.  Chartered in 1797, the lodge counted Spalding among its early members.  He served on a committee that organized the construction of a new lodge building after an 1805 fire and as Junior Warden in 1807.  By the early 1810s, Spalding and his family left Scipio. They eventually lived in Charlotte, Rochester and, later, Lockport, New York.

Intriguingly, Scipio Masons did not establish their Royal Arch Chapter--Aurora Chapter No. 64--until 1819, several years after Erastus Spalding had moved.  Further research may uncover information about when and where Spalding took the mark degree.  Regardless, the text and symbols Spalding had engraved on his medal point to the pride he felt as a Mason and as a citizen of the new United States.