New to the Collection: John Schofield Medal from A. Y. M. Lodge No. 169 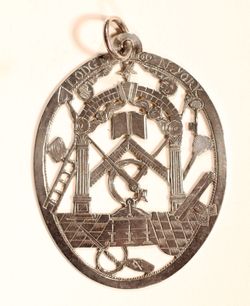 Recently the Scottish Rite Masonic Museum & Library added another intriguing personalized Masonic medal to our collection.  This pierced silver medal, which dates from the late 1700s, bears a few engraved clues to its history—a lodge number, location and name.

Made of a thin sheet of silver shaped into an oval, this medal was ornamented using two decorative techniques, piercing and engraving.  Piercing describes a method by which material was cut out of a silver object to form interesting shapes and patterns—in this case a group of Masonic symbols.  A craftsman may have pierced this medal by hand using specialized tools.  Alternately, it may have been shaped by a die mounted in a hand-operated press.  An engraver added detail to the different symbols—like outlining each stone of the arch at the medal's center and shading the black squares of the pavement under the arch.  He also inscribed information onto the medal:  an owner’s name, “John Schofield” at the top of the oval on one side and a lodge name and location, “Lodge No. 169 N. York” on the other.

This engraving links the medal, and John Schofield, to Lodge No. 169, an institution with a beguiling history.  In 1771 several Boston Masons received a warrant for a lodge from the Grand Lodge (Antient) in London (which accounts for the lodge’s high number).  They met in Boston through 1775.  A few years later, a small

number of No. 169 members and, it seems, their warrant, made their way to New York City.  By 1778 these members participated in the city's Masonic community as “Lodge No. 169, Ancient York Masons.”  In 1786 the Grand Steward’s Lodge in New York, at the request of members of No. 169, agreed to a name change--No. 169 became St. Andrew’s Lodge No. 3.  Viewed in the light of Lodge No. 169’s history, this medal was likely manufactured—or at least engraved—between 1778, when the lodge moved to New York, and 1786, after they changed their name.

But where was it made?  Many English Masonic jewels manufactured from the late 1700s through the early 1800s were ornamented with piercing (to see some examples, search for pierced jewels on the collections database at the  Library and Museum of Freemasonry, United Grand Lodge of England).  Some may have been brought to the colonies with travelers' personal effects; others may have been imported for sale. Silver scholars have noted, based on existing examples of New York-made silver hollowware from the late 1700s and other records, that there were piercers working in the New York City area. There are, however, few examples of pierced Masonic medals from the 1700s with a history of having been used, let alone made, in the colonies. The Grand Lodge of Masons in Massachusetts collection, on extended loan to the Museum, contains three pierced medals from around the same time.  Unfortunately, we don't know who made them nor do they have histories of ownership associated with them.

Adding to the puzzle we have not been able to identify John Schofield.  His name does not appear on an extensive list of Lodge No. 169 members compiled in the 1930s and 1940s.  Several John Schofields lived in New York City and Westchester County in the late 1700s and early 1800s, but, without more information, it is hard to know which (or, indeed, if any) of them commissioned the engraving on this medal. If you have any insights into this intriguing new addition to the collection, please be sure to leave a comment, we would be happy to hear from you!