Washington's Buttons or Shady Hoax?
Louis Leander Alexander and the Sons of Temperance 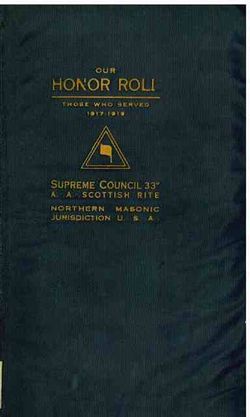 In 1919, the Supreme Council, Northern Masonic Jurisdiction published Our Honor Roll: Those Who Served, 1917-1919. The book contains a list of 14,843 Scottish Rite members from the 15 states that comprise the jurisdiction who "have gloriously served Our Country and the World in its hours of direst need, and have thus nobly assisted to fix the word American as a title of honor wherever courage and self-sacrifice are the cardinal virtues among men..." (The Supreme Council's Proceedings for 1919 noted that the list was incomplete, stating that "subsequent information indicates that the number of our Scottish Rite brethren of this Jurisdiction in the service exceeds 16,000.")

While browsing through the names, I was immediately struck by one entry in particular because of the date of death:

The signing of the armistice officially ended the fighting in World War I at 11:00 a.m. on November 11, 1918 (the 11th hour of the 11th day of the 11th month) and yet there were soldiers killed in action right up until the very end.

John Sanford Winner (1887-1918), a Scottish Rite Mason from Pennsylvania's Valley of Bloomsburg was killed at 9:15 on the morning of November 11 as the 314th Infantry attempted to take Cote de Romagne. An account notes:

"At 9:15 A.M. Nov 11 1918 the company passed through the heaviest artillery it had ever experienced. The company had these casualties Sergt. John S. Winner and Private Harold Edwards killed, Corp. Roy Rinner, John Bremble, and Private Edwin Spaulding wounded."

According to Winner's WWI draft registration card, he was a 30-year-old unmarried barber from Danville, Pennsylvania before joining the 314th Infantry. We hope that further research will reveal more information about Winner, including when he joined the Scottish Rite.