Rainbow Girls and the Pledge of Allegiance in 1943
Lecture: Map and Chart Publishing in Boston in the Eighteenth Century

A Fife with Two Owners: Part of “Prized Relics: Historic Souvenirs from the Collection” 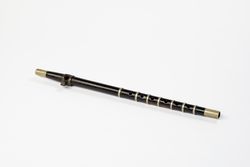 Opening June 14, 2014 at the Scottish Rite Masonic Museum and Library, the exhibition “Prized Relics:  Historic Souvenirs from the Collection” will examine different kinds of relics from homes and families, travels, historic sites and Masonic lodges and the ways these preserved fragments can help us understand the past.

In preparing for this exhibition, museum staff had the opportunity to examine some underexplored objects in our collection.  One that captured my imagination was this small brown fife, pictured at the left, used to make music during the Civil War.  Curatorial records note that this fife belonged to Joseph Warren Batchelder (1842-1926) of New Hampshire.  In looking at the fife, it is easy to see Batchelder’s initials incised onto the body of the instrument, along with place names and dates. The simple shapes of the letters forming the inscriptions on the instrument, as well as the cramped spacing of information incised onto the fife’s body, suggest that the various inscriptions were recorded on the fife by its owner, perhaps over a few years.

Research supports the story that came with the fife when it entered the collection. Enlistment records show that Private Joseph W. Batchelder of Manchester, New Hampshire, joined the 10th New Hampshire Regiment on August 11, 1862, and served in Company A. In 1864 he earned promotion to the rank of Principal Musician.  On his fife, Batchelder incised the names of some of the different places he traveled to and battles he fought in with his regiment including the Battle of Fredericksburg [Virginia] in 1862; the Siege of Suffolk [Virginia] in 1863; and the Battle of Drewry’s Bluff [Virginia] and Cold Harbor, Virginia, in 1864; and Richmond, Virginia, in 1865.

In an effort to read the inscriptions on the fife more clearly, I took a look underneath the pewter mouthpiece that had been loosely attached to it and noticed a second, smaller set of notes scratched into the fife’s surface by “M. T. T.”   This record-keeper also noted the letters NYSV (or NY2V) along with the places and dates, Binghamton, New York, 1861, and New Berne, North Carolina, 1862.  A quick look at the Civil War enlistment records turned up a likely candidate as the inscriber--Milton T. Tyrell (b. 1839) of Canton, New York.  He had joined the 103rd New York Infantry, Company I as a musician in January, 1861, at Elmira, New York.  A regimental history included a short biography of Tyrell and mentioned that when he became a member of the regiment, he:  “entered into the spirit of the soldier, drilling in squad drill with the boys…as well as practicing the army calls with fife and drum.”

Finding that two men marked their names on this fife prompts the question, how did Tyrell’s fife become Batchelder’s fife?  Histories of the 10th New Hampshire Regiment and the 103rd New York Infantry tell us that both Tyrell’s and Batchelder’s regiments traveled to Washington, D. C. in the fall of 1862.  Was the fife lost, sold, traded or stolen in that city?  We may never know how the fife changed hands, but this intriguing object offers us a glimpse into how two men recorded and remembered their war experiences.