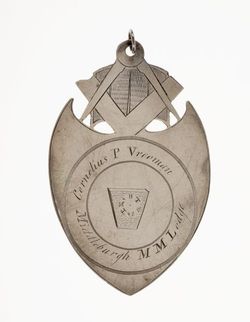 Some time in the early 1800s, Cornelius P. Vrooman (1784-ca. 1821), a member of Middleburgh Mark Lodge, Middleburgh, New York, commissioned this silver shield-shaped medal.  It is a recent addition to the Scottish Rite Masonic Museum and Library's collection.  The maker incorporated important Masonic symbols into the form of Vrooman’s medal--the square, compasses and open Bible at the top of the shield.  Engraved details like the print on the Bible pages and the outline of the compasses’ legs help delineate the symbols.  On one side of the medal (illustrated to the left), the craftsman detailed Vrooman’s name and the name of his lodge as well as a keystone marked with the mnemonic associated with the Mark Master degree, HTWSTTKS.  On the other side (illustrated below), within the border of a circle, the engraver incised the mnemonic in ornamental script.  The circle contains Vrooman’s mark, a man with a scythe.

As noted in previous posts, the emblem selected by the owner of a mark jewel represented something meaningful to him.  Mark Masons chose different kinds of emblems, from patriotic and Masonic symbols, to initials or family crests.  In addition, many Mark Master Masons decided on representations of their occupation or profession as their personal symbol.  Vrooman’s emblem appears to be one such, the man and a scythe likely denoting a farmer.  If an anecdote retold in a 1870s gazetteer can be believed, Vrooman was indeed a farmer.  In a description of the Vrooman family, the gazetteer's author noted that the four Vrooman brothers “were remarkable for their strength.”  As an example, the author related that Cornelius “was accustomed to carry one or two bags…on his shoulders, to favor his horse, when going to Albany with a load of wheat.” 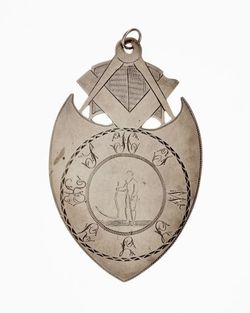 Another example of an occupation-related mark can be found in the record for Rev. Alpheus Harding (1780- 1869), whose mark of a lamb and cross spoke to his job as a religious leader.  This mark is noted in the mark book kept for King Hiram Royal Arch Chapter of Greenwich, Massachusetts.  (You can read previous posts about this beautifully illustrated record and its illustrator.)  Other examples of symbols connoting professions appear in the late 1700s and early 1800s records of Washington Royal Arch Chapter of Middletown, Connecticut.  Members of a mark lodge associated with the chapter often dictated a motto to go with their symbols, leaving a clue as to what their choice of mark represented to them.  For example, William Hall (dates unknown), recorded a knife as his mark and his motto as “amputation,” suggesting he might have been a surgeon.  Charles Magill (dates unknown) selected a brig as his mark and, for his motto, “navigation.”  His fellow member, Noadiah Hubbard, Jr. (b. 1765), accompanied the motto “husbandry” with a plough for a mark.  Another member, recorded in the 1820s, claimed a trowel as his mark along with the motto, “the implement of my profession.”  Taken together these occupational marks offer an intriguing glimpse into the professional landscape of early 1800s mark lodges.