New to the Collection: An Odd Fellows Minute Book from Civil War Era 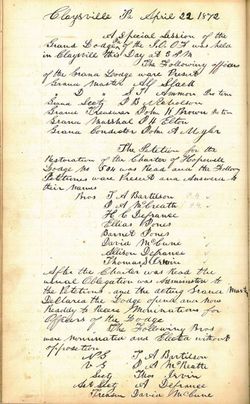 The Scottish Rite Masonic Museum and Library recently acquired an Odd Fellows minute book, from Hopewell Lodge No. 504, dating from 1854 through 1880.  It offers clues as to how the Civil War affected this fraternal organization.

The decades preceding and after the Civil War were times of enormous growth for the Odd Fellows.  However, during the Civil War, Odd Fellow membership decreased as men put on their military uniforms and set out to serve the Union or the Confederacy.

According to Stillson's Official History of Odd Fellowship..., in 1861, there was a proposal to form a Grand Lodge of IOOF of the Southern Confederacy.  However, a division of the fraternal order never officially occurred. The representatives from the Southern states just did not attend the annual meeting of the Grand Lodge of the United States which was held in Baltimore in 1861.  They were absent again from the 1862 and 1863 sessions in Baltimore and from the session in Boston in 1864.  In 1865, at the close of the Civil War, the Northern and Southern representatives of the Odd Fellows met in Baltimore to formally reunite this organization and members from all but two Southern states were present.  The Odd Fellows were the first fraternal organization to reunite.

Many Odd Fellows lodges went dark, or became inactive, during the war.  Hopewell Lodge No. 504, meeting in West Middletown and Claysville,  and located in Washington county, in western Pennsylvania, is a good example of this. During 1854-1858, the Hopewell Lodge No. 504 accepted applications for many members each meeting and held initiations.

Then there is are large gap in the minutes for this lodge from May 17, 1862 to  April 22,1872.  This spanned the time of the Civil War (1861-1865) and the beginning of the Reconstruction Era (1863-1877).  According to Boyd Crumrine's History of Washington County, Pennsylvania:  With Biographical Sketches of Many of its Prominent Men and Pioneers, men from this area of Pennsylvania signed up with the Union army immediately and their participation was greater than any other county in the state or in the Union.  The governor held a special state meeting emphasizing that Pennsylvania was particularly vulnerable having a border on the Mason-Dixon line.  Perhaps this explains the high participation rates from Washington County and Pennsylvania in general.

On April 22, 1872, the minutes resumed and there was "a Petition for the Restoration of the Charter of Hopewell Lodge No. 504" (pictured above).  This suggests that the lodge had gone dark during the Civil War. According to the minutes there was a joint meeting between the Grand Lodge of IOOF and Hopewell Lodge No. 504 during which the petition to restore the charter was accepted and the lodge reopened.  The lodge elected new officers including Thomas A. Bartilson (1816-1906) as Noble Grand.   Other officers included:  P. A. McReath (Vice Grand), Thomas Irvin (Secretary), Allison DeFrance (Financial Secretary), and David McCune (Treasurer).

Halleran, Michael A. The Better Angels of Our Nature. Tuscaloosa:  University of Alabama Press, 2010.

Skocpol, Theda, Ariane Liazos, and Marshall Ganz.  What a Mighty  Power We Can Be:  African American Fraternal Groups and the Struggle for Racial Equality.  Princeton:  Princeton University Press, 2006.