New to the Collection: Order of Knights of Friendship Medals
Lecture: A Civil War Cause Celebre - The Union's First Martyr and a Confederate Flag, 11/9 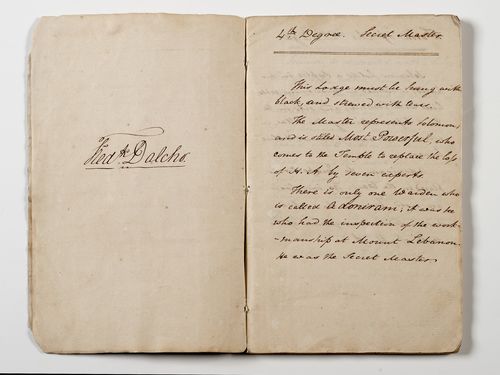 Some of the earliest and most important Scottish Rite rituals in existence are in the collection of the Van Gorden-Williams Library & Archives at the Scottish Rite Masonic Museum & Library. A number of them are currently on view in Secret Scripts: Masonic and Fraternal Ritual Books in the Van Gorden-Williams Library and Archives in the library's reading room.

The earliest ritual on view is Frederick Dalcho's 1801 version of the 4th degree (Secret Master). Dalcho (1770-1836), a medical doctor who later became an Episcopal minister, was the first Lieutenant Grand Commander of the Charleston Supreme Council (today's Scottish Rite Southern Jurisdiction), and served as its second Sovereign Grand Commander from 1816 until 1822. The Charleston Supreme Council was founded in 1801, but the degrees of the Lodge of Perfection (4-14) had been worked in Charleston since the founding of the Sublime Grand Lodge of Perfection in  1783. Upon its founding, the Charleston Supreme Council began bringing together groups and individual degrees that would eventually become the system of Scottish Rite degrees (4-32, as well as the 33rd) that we know today.

Dalcho's 1801 version of the 4th degree is the closest we can get today to the first degree that a candidate would have encountered upon his entrance into the Scottish Rite during its earliest days. Scottish Rite degrees today are theatrical stage productions, an innovation that did not occur until the late nineteenth century. The ritual degrees of the Scottish Rite for most of the 1800s occurred in rectangular lodge rooms, just like the Craft degrees. In the early days of the Scottish Rite, many of the degrees were merely "communicated" to the candidate, which is to say that they were read and explained to him. If the degree were "conferred, that is, fully acted out by the candidate and members of the lodge, the conferral would have taken place in the same type of room - or possibly exactly the same room - as those of the Craft degrees, complete with props and costumes. (See this previous post to get a sense of what the lodge room for the 4th degree would have looked like in 1867.)

Also on view in Secret Scripts is a 33rd degree ritual, written ca. 1801 in Dalcho's hand. It is, in the words of Arturo de Hoyos, "the earliest thirty-third degree ritual directly traceable to the Scottish Rite." Unlike the 4th degree, the Dalcho 33rd degree ritual contains many corrections and additions, demonstrating that, from its beginnings, Scottish Rite rituals have been evolving and changing.

Be sure to check out our previous posts about other rituals that are also on view in Secret Scripts through February 1, 2014.