Lecture - A Season with the Army: Civil War Nurse Harriet Eaton, 10/26
New to the Collection: Order of Knights of Friendship Medals 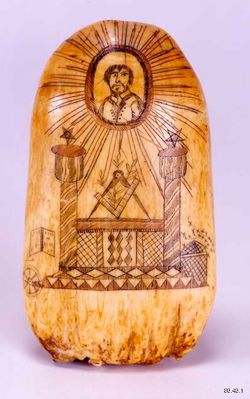 To help pass unoccupied time on long sea voyages, whalers and sailors crafted both fanciful and useful objects out of materials they had to hand aboard ship. Sailors and others called whale bone and teeth decorated by mariners scrimshaw, and the men who practiced the pastime, scrimshanders, as early as the 1820s. This decorated tooth—thought to have come from a bull sperm whale—is an example of this maritime folk art. With his depiction of Masonic symbols, the seafarer who incised images on this tooth sought to celebrate Freemasonry. He also may have wished to call attention to a Masonic folk hero, John Coustos (1703-1746).

Surrounded by halo-like rays of light, the man engraved on this tooth is thought to be Coustos, in part due to a note that accompanied the tooth when it entered the collection of the Scottish Rite Masonic Museum and Library. You can examine the accompanying engraved images of Coustos and judge if you think the image on this tooth is his portrait. A Swiss-born British citizen, Coustos worked in Lisbon, Portugal, as a lapidary, or gem cutter. He had been a member of lodges in both London and Paris. In 1741 Coustos formed a lodge for foreign Masons who lived in Lisbon and served as its master. Freemasonry had been banned in Portugal a few years previously. When authorities learned about Coustos’ lodge, the Inquisition arrested Coustos for participation in Masonic 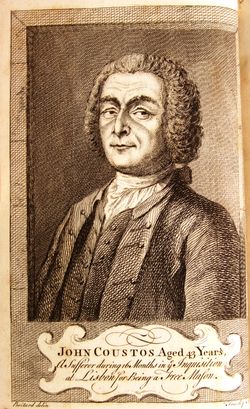 activities. News of his arrest and the charges against him traveled as far as Boston. For over fifteen months he was imprisoned and questioned under torture. The inquisitors finally sentenced Coustos to four years in a workhouse as punishment for organizing a Masonic lodge in Portugal. Not long after, the British ambassador to Lisbon arranged for Coustos’ release.

Upon his return to England, Coustos wrote a sensational book about his experiences, The Sufferings of John Coustos for Freemasonry…. It first went on sale in 1746. Soon after, Coustos died. His account, which featured lurid details of his imprisonment and engravings depicting his torture, proved irresistible to readers. Coustos’ work also capitalized on the wide-spread anti-Catholic sentiment of the time. Although some modern scholars have questioned aspects of Coustos’ description of his torture and his assessment of how much Masonic information he did or did not reveal to his interrogators, many readers admired Coustos for keeping his Masonic oath under the strain of torture. The Sufferings of John Coustos for Free-Masonry… remained in print for decades. Some editions featured a portrait of Coustos as a frontispiece, like the British examples seen here. American publishers made versions of the work available to readers from the 1790s through the 1850s. An engraving of Coustos may have served as a model for the scrimshander who decorated this tooth. You can see this tooth on view at the museum, outside the entrance to the Farr Conference Center, the next time you visit.

William McLeod, ed., The Sufferings of John Coustos, A facsimile reprint of the first English edition published at London in 1746 (Bloomington, Illinois: The Masonic Book Club), 1979, 1-74.