Beginning the Next 200 Years
A New Book! A Sublime Brotherhood 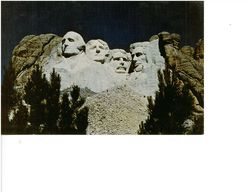 At our July Collections Committee, we accepted a gift of approximately 400 postcards from Michael Heitke.  Many of these postcards show images of national monuments in the United States and over half the collection are items showing images from Wisconsin, the home state of the donor.  They range in date from 1907 through 1950s.

As Americans are taking their summer vacations, it is revealing to take a look at 1950s postcards. Some of the same destinations that were popular in the 1950s are just as popular today.

Mount Rushmore  National Monument is a typical tourist destination in South Dakota (see postcard at the left).  Gutzon Borglum (1867-1941) was the artist who supervised the sculpting of Mount Rushmore and many other American public sculptures.  Borglum was an active Freemason and raised in the Howard Lodge No. 35 of New York City in 1904.  He served as its Worshipful Master from 1910 through 1911.  He received his Scottish Rite degrees in the New York City Consistory in 1907.

Noteworthy is that among the four presidents carved into stone at Mount Rushmore, two of them were well-known Freemasons--George Washington (1732-1799) and Theodore Roosevelt (1858-1919) and two were not.  Thomas Jefferson (1743-1826) was not a Freemason.  Abraham Lincoln (1809-1865) petitioned to join Tyrian Lodge of Springfield, Illinois after his nomination for president in 1860, but never followed through on receiving his membership.

The Dells of the Wisconsin River is a popular destination especially for Americans in the Midwest (see postcard below). Created by early glaciers, the "Jaws of the Dells" is the sandstone gateway, or corridor to the Upper Dells of the Wisconsin River.  It is located in south central Wisconsin.  Access by boat is the only way to see these natural sandstone formations.  Henry Hamilton Bennett (1843-1908) was the landscape photographer who made the Wisconsin Dells a popular tourist destination by his photographs.  This postcard of the Wisconsin Dells is a 1950s reproduction from the H. H. Bennett Studio.  As far as I can tell Bennett was not involved with Freemasonry, though he lived through the "Golden Age of Fraternalism." 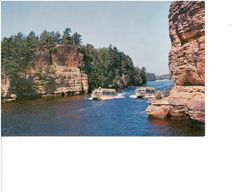 Postcard of Gateway to the Upper Dells of the Wisconsin River, ca. 1950. Gift of Michael Heitke, USM 082, Scottish Rite Masonic Museum and Library.