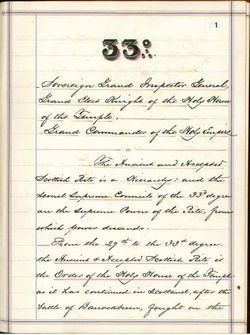 Albert Pike (1809-1891), Sovereign Grand Commander of the Scottish Rite’s Southern Jurisdiction from 1859 to 1891, revised all of the Scottish Rite degree rituals, including the 33°, during his tenure. A handsomely bound book, containing Pike's reworked version of the 33°, was presented to the Supreme Council, Northern Masonic Jurisdiction (NMJ) in 1870. This manuscript version of Pike's 33° ritual is currently on view in the Van Gorden-Williams Library & Archives reading room exhibition, Secret Scripts: Masonic and Fraternal Ritual Books, at the Scottish Rite Masonic Museum & Library.

The inscription (see below) inside the book reads:

In June 1870, three months after Graham inscribed the Pike ritual to the NMJ's Supreme Council, Albert Pike attended the Northern Masonic Jurisdiction's annual meeting, held that year in Cincinnati, Ohio. Although Sovereign Grand Commanders from the NMJ and the SJ regularly attend each other's annual meetings today, Pike observed in 1870 that "It is, I think, the first time when the Grand Commander of one of our Supreme Councils has been present at a session of the other..." Although the 33° was conferred upon fourteen men at the 1870 annual meeting, the NMJ's annual Proceedings from 1870 do not indicate whether the Committee on Rituals had adopted the Pike ritual and whether that was the version of the 33° ritual that was used. 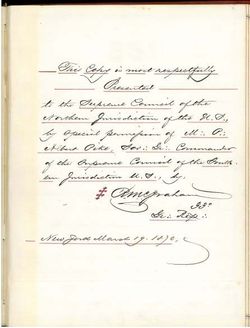 That Graham would have presented the ritual to the NMJ's Supreme Council is unsurprising. Not only was Graham the NMJ's Grand Representative to the SJ's Supreme Council, he was also close friends with Pike. Pike himself wrote the obituary for Graham that was published in the SJ's Official Bulletin. The obituary (later reprinted in Pike's collection of obituaries, Ex Corde Locutiones) is dated March 10, 1891 - less than a month before Pike's own death. Writing about Graham, Pike not only makes it clear that Graham was a friend, but that he was intimately involved with the activities of the Southern Jurisdiction's Supreme Council: "During the last ten years he had regularly been present at our sessions, feeling like one of us, and looked upon by us as one of ourselves, so much so that he sat with us in our confidential sessions, always welcomed and beloved by all."

The Northern Masonic Jurisdiction used Pike’s 33° ritual from 1870 until 1880, at which point they adopted Charles T. McClenachan’s revision of Pike’s ritual. A version of this ritual was used until 1938, when the Supreme Council approved a rewritten ritual composed by then-Sovereign Grand Commander Melvin M. Johnson. It is a version of this ritual that the NMJ's Supreme Council still uses today.

de Hoyos, Arturo. “On the Origins of the Prince Hall Scottish Rite Rituals,” Heredom 5 (1996): 51-67. [In this article about how the NMJ assisted in the production of the United Supreme Council (PHA)'s book of Scottish Rite rituals, de Hoyos, using primary sources in the collection of the Van Gorden-Williams Library & Archives, provides a few concise paragraphs (pp.60-61) on the development of the NMJ's 33rd degree through the nineteenth century.]