New to the Collection: Modern Woodmen of America Banner 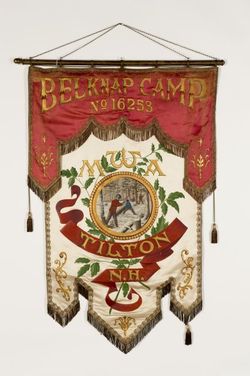 The Scottish Rite Masonic Museum & Library recently added a collection of Modern Woodmen of America objects and documents to its holdings, including this banner. As we explained in a previous post, banners were an important component of American fraternal activities. These colorful textiles were used inside lodges and also in public parades, at cornerstone layings and at other ceremonies. This banner was originally used by Modern Woodmen’s Belknap Camp in Tilton, New Hampshire. Unfortunately, we know little about the history of this camp today. A photograph from our collection, showing a Modern Woodmen of America drill team from an unknown location, shows that fraternal groups often included their banners when they posed for a formal picture. 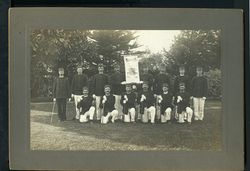 Thanks, Graeme! I couldn't have said it better myself. Unfortunately, with their frequent use both inside and out during bygone days, they are often in only fair to bad shape. But, that doesn't mean they should be thrown away! Museum staff are happy to try and help with assessing a banner - or any kind of Masonic or fraternal object. Just send us an email or give us a call. Thanks for reading the blog and commenting! Aimee Newell, Director of Collections

Banners like these are relics of a bygone age. You can sometimes see them in lodges. Often they are Eastern Star, Commandery, Rainbow and DeMolay. They are redolent of the times when groups took part in civic parades, far more than they do now.

They are generally consummate works of commercial art, with excellent use of spacing and ornate typography, often painted or gilded onto silk. They are a pleasure to behold.

If you know of one in your lodge, please make sure that it gets taken care of, so that future ages of brethren may be edified and enthralled.