New to the Collection: Tall Cedars of Lebanon Sign
Call for Papers - April 2014 Symposium - Perspectives on American Freemasonry and Fraternalism

Five years of blogging - and another Masonic impostor 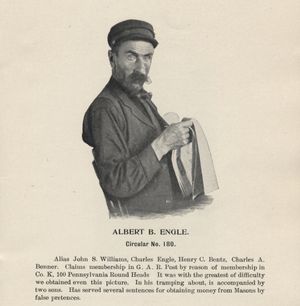 Our blog turns five years old this month and, in keeping with our previous anniversary posts, we take yet another look at a Masonic impostor.

This year we feature Albert B. Engle. The brief description under his photograph in the Album of Masonic Impostors reads, in part, "It was with the greatest of difficulty we obtained even this picture. In his tramping about, is accompanied by two sons. He has served several sentences for obtaining money from Masons by false pretences."

The October 1902 issue of the Quarterly Bulletin of the Iowa Masonic Library featured a short article on Engle, titled "An Imposter in Iowa," which reported that Engle had been active in Nebraska, Kansas, and Missouri. The Bulletin article reports that he was arrested and charged with obtaining money under false pretences. (You can read the whole article here.)

Engle appears to have been active - and on the move - for quite some time. A Los Angeles newspaper item from 1909 - seven years after the Iowa article mentioned above - reported that Albert B. Engle and his sons, Henry and William, had been sent to the county workhouse for vagrancy. The article states that "According to Detectives Boyd and Jones, who made the arrests, the trio have been beating their way from eastern cities to Los Angeles on the plea that they are Masons who had been held up and robbed of all their money and playing upon the sympathies of Masons for financial reasons. (You can read the whole article here.)

If you want to learn more about Masonic impostors and the Album of Masonic Impostors, just check out our previous posts on the topic, which we link to in the first paragraph above.