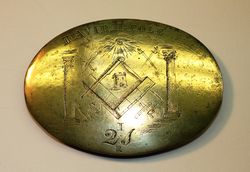 This object, an 1810s belt plate in the collection of the Scottish Rite Masonic Museum and Library, carries several hints about its original owner:  a name, regiment number and a selection of Masonic symbols. But even with this comparatively rich group of clues, the story of this belt plate and the man who wore it remains elusive.

Belt plates formed part of military dress in the late 1700s and into the 1800s. Officers and soldiers who wore cartridge boxes and swords, bayonets or other weapons suspended them on leather straps. During the War of 1812, when this plate was made, some soldiers wore decorative metal plates, often brass, on their uniform straps, at their chest or at their shoulders (you can see examples of both British and American 1812-era plates here). The U. S. Army uniform regulations did not detail plate designs until the 1820s. Many 1812-era regiments had their own uniform requirements and it is hard to know how closely soldiers followed regiment and Army uniform regulations. This cast brass belt plate may have been one Cole purchased or one issued to him and later engraved by a craftsman at his request. Either way, the engraving on this plate made it a one-of-a-kind object in Cole’s time and today.

An enlistment record for the 21st U. S. Infantry Regiment notes that David H. Cole, a trader, aged 23 and born in Cornish, Massachusetts (now Cornish, Maine), enlisted at Salem, Massachusetts, in April,  1814.  He served through May of the next year. The recorder also noted that Cole was 5’ 7 ¾” tall, with blue eyes, light hair and a light complexion. Another record tells us that for his service, in 1816 Cole earned a 160-acre land grant in Illinois.

Records maintained at the Grand Lodge of Masons in Maine notes that a man named David Hammond Cole--initiated, passed and raised in 1814--was a member of Pythagorean Lodge No. 11 of Fryeburg.  Was this the same David H. Cole whose name is on the belt plate?  Possibly.  So far it has not been possible to confirm that David H. Cole and David Hammond Cole were one and the same, but it is clear that the David H. Cole who had the plate engraved identified himself with Freemasonry.  His plate features Masonic symbols including: columns, various working tools and symbols of office, as well as a square and compasses and an all-seeing eye.  The crenellated structure at the center of the square and compasses is not a standard Masonic symbol, but must have held meaning for David Cole, since he had it placed at the very center of his belt plate.

Cole’s decorated belt plate may be one-of-a-kind, but related objects exist.  The collection of the Grand Lodge of Masons in Massachusetts also includes an earlier belt plate engraved with a name and Masonic symbols.  This silver plate bears a date, 1787, and an owner’s name, Elnathan Holmes, Jr. (b. 1763).  Most of the symbols and the motto depicted on Holmes’ plate came from the frontispiece of a Masonic expose that had first been published in London in the 1760s, Jachin and Boaz; or An Authentic Key to the Door of Free-Masonry.  The engraver who decorated Cole’s plate used a different—and less readily identifiable—source.  Both Holmes and Cole left behind intriguing puzzles.  More importantly, they left enduring evidence of their pride in their military service and in their association with Freemasonry.

Update: Thanks to help from the Bonney Memorial Library in Cornish, Maine and the Cornish Historical Society, we have some more information about the David H. Cole (1789-1841) who owned this belt plate.  His parents were Capt. Henry Cole (1764-1840) amd Olive Hammons (d. ca. 1805).  David Hammons Cole earned his living as a trader in Cornish, lived in Limington, Maine in the 1820s and later worked as an merchant and auctioneer in Portland, Maine.