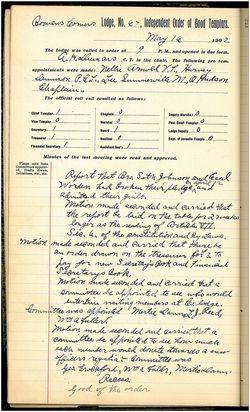 The year 2012 has brought many new acquistions to the Archives and one notable collection was a group of seven ledgers from Bowens Corners Lodge, No. 67, Oswego County, New York of the Independent Order of Good Templars. These ledgers date from 1902-1908.

One of the ledgers contains a printed copy of the Good Templars' Constitution. Article II, Section I, of this Constitution is the pledge which reads: "No member shall make, buy, sell, use, furnish, or cause to be furnished to others as a beverage, any Spirituous or Malt Liquors, Wine or Cider; and every member shall discountenance, in all proper ways, the manufacture, sale and use thereof." Each man or woman had a membership certificate that gave them clearance into the order. Nellie Dumars had been an officer of the Bowens Corners Lodge and signed her name to this certificate (below) in 1904.

Bowens Corners Lodge minutes from another ledger reveal that certain members, Seth Johnson (b. 1879) of Granby and Earl Worden (b.1882) of Volney had "broken their pledge on April 12, 1902 and admitted their guilt." At a meeting in May 16, 1902 members decided to table this issue while they consulted Article VII of their Constitution which deals with offenses and trials. If Johnson and Worden drank alcohol then they were to be expelled and restored to the order only with a restoration ceremony in open lodge within four weeks of the admission of guilt. Later that summer according to the minutes, on June 6, 1902, Johnson and Worden were in fact expelled from the Bowens Corners Lodge. One can speculate, perhaps, how difficult these two men found it to stop drinking.