Independent Order of Good Templars in Oswego County, New York
Back to Our Roots: The Scottish Rite Masonic Museum and Library, Inc.

The Rowlands Family: Freemasonry as a Tradition 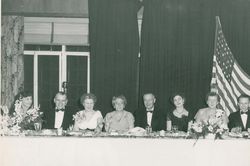 For the Rowlands family, Freemasonry was a family tradition.  Richard Allison Rowlands (1890-1955) was Grand Master of Masons of the State of New York from 1950 through 1952.  He often shared Masonic events with his family, particularly his wife, Gertrude, and his daughter, Patricia.  They are all seen at a visitation to the Westchester-Putnam District in New York, on April 29, 1950 in the photograph (on the left).  R. A. Rowlands is fifth from the left, Gertrude is on his left and Patricia is on his right.

The photograph (on the right) shows Richard A. Rowlands at another Masonic event--throwing out the First Pitch at the 14th Annual Baseball Game and Circus Show, Dexter Park, on June 10, 1950.  The event was sponsored by the Brooklyn Masonic Association for Charity, Inc.  R. A. Rowlands participated in many family Masonic events as well as lodge meetings. 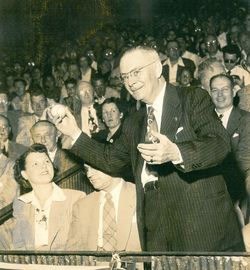 R. A. Rowlands' grandson, Richard V. Travis (son of Virginia Rowlands and L. Earl Travis), is the donor of this collection of materials including a photograph album, three scrapbooks, over 20 Masonic, military, and civic certificates, ephemera and museum objects.  Richard V. Travis is also Executive Director of the Scottish Rite Masonic Museum and Library, here in Lexington, Massachusetts.   He is a Scottish Rite Mason, on the Board of Directors for the museum, and is a member of many Masonic organizations.

Proceedings of the Supreme Council of Sovereign Grand Inspectors General of the Thirty-third and Last Degree of the Ancient Accepted Scottish Rite of Freemasonry for the Northern Masonic Jurisdiction of the United States of America, 1955, p. 372-373.