The Earliest Record and Minutes of the Scottish Rite’s Supreme Council, Northern Masonic Jurisdiction
Found on a Civil War Battlefield

Modern Woodmen of America Postcards: Then and Now 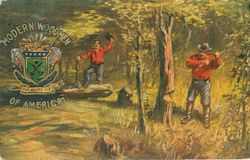 In 1883, Joseph Cullen Root (1844-1913) founded the Modern Woodmen of America.  Root held the opinion that Freemasonry and other fraternal organizations were crucial to the promotion of human welfare.  He belonged to the Masons, Scottish Rite, Knights Templar, Knights of Pythias, and the Independent Order of Odd Fellows.

Root wrote the ritual and served as the first “Head Consul” for the new order, which was established as a fraternal assessment society.  In 1888, the Royal Neighbors of America was established as the women's auxiliary to the Modern Woodmen of America.  By 1889, there were 42,694 members of the MWA organization.  This fraternal organization was prosperous and by 1913, the year of Root’s death, the membership had increased to 700,000.

In 2011, The Scottish Rite Museum and Library acquired several MWA postcards by donation.  These donations complement the growing collection of postcards with images from the Modern Woodmen of America.  Most of these postcards date from 1908-1912.  This was the height of membership for MWA 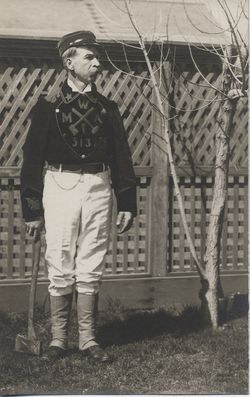 and also coincides with the “Golden Age” of postcards which ocurred from 1907 through 1915.

The newly acquired postcard above bears the insignia or emblem of MWA and several of their symbols including the axe, mallet, wedge, five stars, and branches of palm.  These are all displayed on a shield.  There are lumberjacks or “woodmen” cutting down trees in the background.  This was symbolic for MWA as the clearing of forests refer back to clearing away problems of financial security for member’s families.

From our exisiting collection is a photographic postcard of a man in his MWA uniform and is dated   about 1910.  This man belonged to a MWA “camp”, No. 513, probabaly from Montana.  His jacket has the MWA symbols of the axe, mallet, and wedge.  The man is also posing with a parade axe.

When the MWA was founded it excluded men with risky or dangerous occupations such as:  firemen, miners, wholesalers and manufacturers of liquor, sailors, plow grinders, and brass workers.  The organization also sought low-risk members and excluded men from the largest urban centers such as:  Chicago, Detroit, St. Louis, Milwaukee, and Cincinnati.

Today, MWA is solely a fraternal financial company named Modern Woodmen.  It provides life insurance and disability insurance for its members.  Life insurance totaled over $34.2 billion in 2011.   It now has a modern office building, on the Mississippi River, in Rock Island, Illinois, which it has occupied since 1967.

Posted at 09:00 AM in Fraternal groups (not Masonic), Modern Woodmen of America, Postcards, Posts by Catherine Swanson | Permalink | Comments (0)