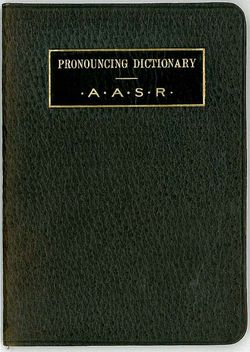 Scottish Rite ritual abounds with names that might trip up even the most well-read Mason. A number of Hebrew, Latin, and Greek names and phrases show up in the rituals of the Scottish Rite's Northern Masonic Jurisdiction. What's a man to do when faced with memorizing lines that might contain Biblical names like Adoniram, Nebuchadnezzar, and Zerubbabel?

How about a handy reference book?

"It is not intended to indicate the classical pronunciation or to supply the frequently obsolete forms of the languages from which the words may be derived. The work of the Ancient Accepted Scottish Rite in this Jurisdiction is rendered in the English tongue, and where Hebrew, Latin, Greek, or other proper names and words have been authoritatively represented by English substitutes or by English forms it appears pedantic and unwise to adhere to original forms or to attempt pronunciation often impossible to English utterance.

For the same reason compromise has been sought between conflicting schools of pronunciation of Latin words and phrases, and the pronunciation here given, it is believed, will avoid the extremes of the classical scholar while being in full accord with polite usage."

As for Zerubbabel, who appears as a character in the 15th and 16th degrees, the name was pronounced the same in 1914 as it is today: accent on the second syllable.

Hand-Book of Pronunciation of Words Used in the Ritualistic Ceremonies and Work of the Ancient Accepted Scottish Rite of Freemasonry, Northern Masonic Jurisdiction, U.S.A. Published by the Supreme Council for the use of the Bodies of the Rite, 1914.
Call number: 00 .S959d 1914