A “Segar Box” and Its Intriguing History

If you come to the Scottish Rite Masonic Museum and Library this summer, look for this luminous Japanese lacquer box decorated with Masonic symbols. Although the box is small in size, there is a lot of history behind it. 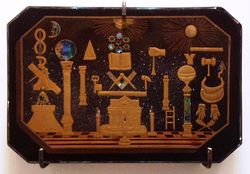 Japanese craftsmen decorated the top of this metal box with designs taken from a book about Freemasonry that had first been published in London in the 1760s, Jachin and Boaz; or An Authentic Key to the Door of Free-Masonry. The decorators built up the box’s surface with layers of smooth, glossy varnish that covered golden Masonic emblems. Specks, chips and shaped pieces of iridescent mother-of-pearl highlight the different symbols. Gold diagonal bands and sprigs of gingko, chrysanthemum and lotus blossoms ornament the sides of the box. In 1797 publishers issued a new edition of Jachin and Boaz; or An Authentic Key to the Door of Free-Masonry. This version included changes to the book’s frontispiece. The frontispiece, an illustration of a Masonic medal, had formerly shown an oval shaped medal. The new image featured a rectangular medal with clipped corners, similar to the corners of this box. As well, the refigured illustration included additional symbols such as “Hiram’s Tent” and the “Entrance or Porch to Solomon’s Temple.” The craftsman who made this box used the 1797 frontispiece as a model for his rendition of Masonic symbols. He included both of these newly-added symbols on the container, one at the center, one on the left.

The museum purchased this box in 1978. With it, the seller included an 1835 letter which outlined the history of the “segar box,” or cigar box.  In this note, a past owner of the container, Benjamin Whitman, said that the box “was given to Genl Stevens of New York-a revolutionary Officer by Genl George Washington-Commander in Chief of the American Armies.....” The missive goes on to relate that after Washington died [in 1799] Gen. Ebenezer Stevens (1751 or 1752-1823) presented the box to Gen. John Winslow of Boston. He continued to recall that, “in it was placed a leaf, that grew on a bush that grew over the Tomb of Washington, the first year after he was deposited in the Tomb.” Winslow cherished the gift and when he died, the writer reports, “he gave the same precious memorial to me—and I now give the same to my beloved son—George Henry Whitman, whose former name was John Winslow Whitman, having been named for my esteemed friend.”

Before a Boston family valued this heirloom for its associations with America’s first president, the little box had to travel a long way. In the 1700s, Japan was closed to Westerners, only the Dutch enjoyed an agreement which allowed them to trade with Japan. So how did this box get to the United States? One possible explanation is that in the late 1700s Dutch traders, to avoid British warships, chartered a few American ships to help them move cargo from Nagasaki to Java and back. Captain James Devereux of the Franklin undertook one of these voyages from April to December of 1799 and returned to Boston in 1800. He brought back several items from this journey, some of which are now at the Peabody Essex Museum in Salem.  Rearchers have suggested that he traded for this box on that voyage. If so the box did not make it to the United States in time for Washington to give the exotic present to Stevens himself--Washington died in 1799. The 1835 letter written by John Whitman that accompanied the box does not tell this story.  It does, however, suggest that Stevens, the intended recipient, eventually owned the box. Based on Whitman’s letter, sometime after Washington's death, Stevens presented the box to John Winslow of Boston. In 1819, Winslow gave it to Benjamin Whitman, who in turn passed it on to his son in 1835.

If you have any thoughts or questions about this box and its intriguing history, please leave us a comment below.