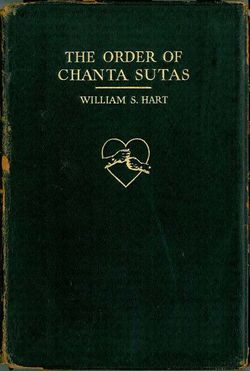 What do a silent Western film star, boys playing "cowboys and Indians" in the 1920s, and Freemasonry have to do with each other?

We recently purchased an intriguing ritual book, written by William S. Hart, entitled The Order of Chanta Sutas: A Ritual, published in Hollywood in 1925. The book contains the text of the initiation rituals for three fraternal degrees (Indian, Plainsman, Scout). The first page of the book explains that "the Order of Chanta Sutas is designed for boys fourteen, or over. A preliminary training in the Boy Scouts or some other organization, while not absolutely essential, is highly desirable; for the work herein outlined can be best grasped and followed by boys who have already had concerted troop training."

But who wrote this ritual and why do the settings of the three degrees seem like they're straight out of a movie Western? 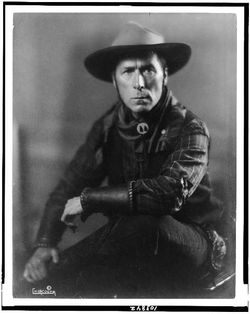 William S. Hart - better known as Bill Hart - was a silent film star who appeared in dozens of Westerns from 1914 until 1925. Hart began his career as a stage actor and appeared in the original Broadway production of Ben-Hur in 1899 - a role he reprised in his first film appearance in 1907. His last movie, Tumbleweeds, came out the same year as the book under discussion here, The Order of Chanta Sutas.

It's perhaps no surprise to discover that Hart was a Freemason. The ritual of the Order of Chanta Sutas carries all the hallmarks of Masonic and fraternal rituals: three initiation degrees that involve swearing oaths that one will not share with non-members the grips (i.e. handshakes), passwords, and signs that are imparted to the candidate. What makes Hart's ritual so interesting is that he borrows heavily from the Old West themes of his movies.

The third degree (Scout) ends with the candidate being told the secrets of the Order. And yet, not everything is revealed. As with many printed rituals, this one leaves blank those things which are considered secret so that, rather than describing a sign, the text merely indicates that the sign (which will be taught to the candidate) should be given. Here's an example from the Chanta Sutas ritual:

The Sign of the Third Degree, which means "I am a Scout," is made in this way. [Shows sign.]

The big question I hoped to answer when looking at the book was what, exactly "Chanta Sutas" referred to. I was initially disappointed to find this on the second-to-last page of the book:

Yes, that empty blank line is in the book. A footnote indicates that "this material will be supplied in person by the monitor of the Lodge."

Happily, a biography of Hart published in 2003 - Ronald L. Davis's William S. Hart: Projecting the American West -reveals that the phrase "Chanta Suta" was drawn from Hart's own life - although possibly an exaggerated, romanticized version of it. While Davis observes that Hart "claimed to know and understand the Indians far better than he in fact did," he also reports that Hart "boasted that his Sioux friends had given him the name Chanta Suta, meaning "Strong Heart," and that his friendship with the Indians had done much to strengthen his character and deepen his understanding of fundamental truths." (You can read more about what Davis has to say here.) As for how Chanta Suta became Chanta Sutas, it appears that Hart pluralized the name he claimed was given to him, so that all young boys who aspired to by like their Western film idol could also become a part of the Order of Chanta Sutas.

If you know anything more about the Order fo Chanta Sutas, please leave a comment below.

Photo of William S. Hart courtesy of the Library of Congress: