New Library Acquisitions - May 2012
Freemasonry and the Early Mormons 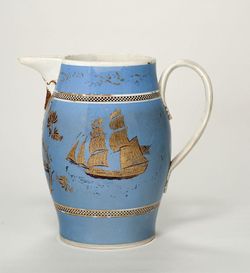 In the late 1700s and early 1800s, American consumers could choose from a variety of types and styles of earthenware produced in England and imported to the former colonies.  This summer the Scottish Rite Masonic Museum and Library will feature a few earthenware commemorative pitchers in the lobby and hallway display areas.

Many surviving historic commemorative pitchers are creamware, decorated with transfer prints and further ornamented with gilding or colored enamel paint, you can see an example here.  This blue one, which will be on display starting mid July, is a little different.  Once decorated with black paint and gilding, this pitcher is made of what is now called pearlware, an earthenware with a white, as opposed to cream or buff, color.  To achieve the blue band of color around the pitcher, makers decorated it with slip—clay with color and water added to it.  This method of adding color and pattern to ceramics took less time and did not cost the manufacturer as much to produce as transfer-printer wares.  This presentation pitcher would have been a not-quite-as expensive alternative to transfer-printed or hand-painted creamware.  In fact, as collector Jonathan Rickard has written, this kind of slip-decorated ceramics were “the cheapest imported decorated wares available in American during the federal period.” 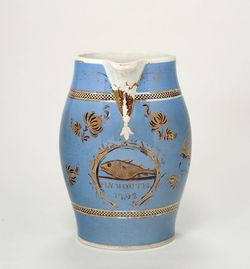 Makers called this pottery dipped ware, referring to the way the color was applied, by dipping the pot into slip.  Rickard has noted that many dipped wares with a blue field, often accompanied with a black and white checkerboard band, survive. They were likely popular with consumers.  This example is further decorated with black paint and gilding.  Over time some of the paint and gilding on this jug, which did not adhere to the glazed surface of the vessel, has flaked off.  Rickard has suggested that some owners may have scrubbed off the incomplete decorations as soon as the paint and gilding started to show signs of wear.  As a result, dipped wares with any remaining gilding are uncommon survivals.

This example retains enough gilding and paint to show a legible inscription under the spout, “Plymouth 1792,” and discernible images of a cod fish, a ship flying the British flag and a square and compasses with the letter G.  These decorations turned the pitcher into a presentation object. This jug is part of the collection of the Grand Lodge of Masons in Massachusetts, but its early history is unknown.

The images on the pitcher offer some tantalizing, if inconclusive, clues.  The year 1792 is an important 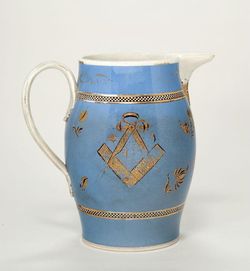 one in the history of Massachusetts Freemasonry, when two competing grand lodges united to form one.  Plymouth was also a community involved in shipbulding and trade.  As well, the cod fish has played an essential role in the economic history of the commonwealth, so much so that a wooden one has hung in the state house since the early 1700s.  When the state legislature moved from the Old State House to Beacon Hill in 1798, members wrapped the cod in an American flag and carried it at the head of their ceremonial procession to the new building.  This important spot in the procession signaled the symbol’s importance to all who witnessed the parade.

In spite of the intriguing clues offered by the decorations on this object, the event commemorated with this pitcher is a mystery.  If you have any ideas, please be sure to leave a comment, we would be happy to hear from you!

McCauley, sadly, did not always mention where he saw or who owned particular pitchers he refers to in his text. I will send you some suggestions for avenues to explore via email.

Good luck with your research!

I'm trying to track the whereabouts of a similar pitcher that belonged to my 5th great-grandfather, Lieutenant Samuel Treat of Boston. It is inscribed under the spout, "A gift of J. Rob. to Lieutenant Treat of the Castle, 1792". It appeared in an auction catalog in April 1937, and was mentioned in a book entitled, "Liverpool Transfer Designs on Anglo-American Pottery" by Robert Henry McCauley.