A Ritual Bell on View in Curators' Choice
The Lexington Alarm Letter on View at the Museum!

The Sprague Family: An American Story

“William Sprague was the youngest of three brothers…who arrived in Salem in 1629, and from thence removed to Charlestown (then called Mish-a-wam by the natives) where they, with a few others, were the first to form an English settlement.” –Marcia A. Thomas, 1835 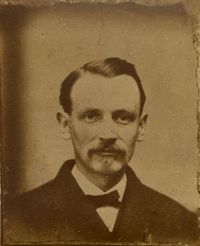 At the center of the collection is Harold W. Sprague, who assembled much of the material. Harold was an extremely active member in fraternal and civic organizations during his lifetime, being appointed Deputy Grand Master of the Grand Lodge of Massachusetts in 1952, as well as being recognized by the Sons of the American Revolution. Harold’s involvement in these organizations demonstrates his sense of community and speaks to his interest in history and tradition. Much of the information gleaned from the collection comes from Harold’s own research into the Sprague family history. His investigations led him down a road of various Sprague relations, including the Burt, Taylor, and Adams families, among others.

It was through these familial connections that Harold was able to piece together the links between his ancestors and two great political families of the 18th and 19th centuries. William Sprague, who came to Salem in 1629, had numerous children with his wife Millicent Eames. Among these was Samuel (Harold’s ancestor) who remained in Massachusetts, and William, who moved to Rhode Island around 1664. William (the younger) established the Rhode Island line of Spragues that included two prominent leaders. The first, William Sprague III, was the 14th Governor of Rhode Island (1838-1839). William also served in Congress both before and after he was governor, first as a Representative (1835-1837) and then as Senator (1842-1844). His nephew, William Sprague IV, was greatly influenced by him and followed him into the political realm at an early age. In 1860, William IV was elected the 27th Governor of Rhode Island (1860-1863). He was only 30 years old at the time, making him one of the youngest governors in U.S. history. Like his uncle, William IV was also a member of Congress, serving two terms as Senator (1863-1875).

While the Sprague family in Rhode Island was certainly notable for their political power, it was through Harold Sprague’s mother that the family is connected to its most influential relatives. As Harold learned through his research, his mother’s side of the family could trace their lineage all the way back to Joseph Adams (1654-1736). Joseph was the uncle of founding father and statesman, Samuel Adams. Even more directly, Joseph’s grandson was John Adams, 2nd President of the United States. John Adams served as vice-president under George Washington from 1789-1797 before being elected president in 1797, serving one term. He was greatly influential as a political thinker and was one of the original signers of the Declaration of Independence. His political legacy was carried on by his son John Quincy Adams, who served as the 6th President of the United States from 1825-1829. He then had a long career as a representative in Congress (1831-1848), winning reelection eight times!

Numerous letters, notes, and genealogical charts in the collection show the familial links between the Adams and Sprague families. In addition to these documents, the collection includes autograph books containing a variety of signatures, including those of John Quincy Adams and his son Charles Francis Adams. The presence of these signatures shows just how close the families were. In fact, numerous letters between prominent members of the two families can be seen in the Massachusetts Historical Society’s Adams Family Papers. A quick search through the MHS Online Adams Catalog reveals dozens of letters between the Adams and Sprague families. 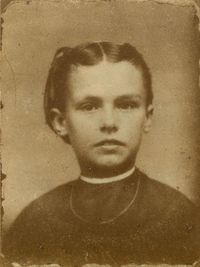 The story of the Sprague family is a familiar one in American history. Beginning with a long voyage across the sea, three brothers set forth to explore and establish a new land. They made their home among the wilds of North America and built towns, cities, and families along the way. As time passed, the Sprague family expanded, and the founders of towns gave way to founders of countries and leaders of states. Theirs is certainly an American story, one that can be discovered in the collections at the Van Gorden-Williams Library and Archives.

If you want to learn more about the contents of this collection, we've made the Sprague Family Papers finding aid available online.