The Sprague Family: An American Story
New to the Collection: A Masonic Cupboard from Indiana

The Lexington Alarm Letter on View at the Museum! 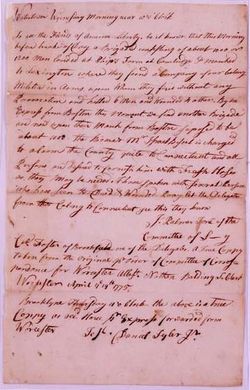 Each year around the time of the Patriots' Day holiday, the Museum is proud to display the Lexington Alarm Letter. Our document is a copy, made at Brooklyn, Connecticut on the morning of April 20th, of the original letter, written on the morning of April 19, 1775. The Connecticut copy was made by Brooklyn town officials from the original, now lost, which was sent by post rider to notify the colonies south of Massachusetts that war had begun. Visitors will have the opportunity to see the letter during its annual appearance between Wednesday, April 10 and Saturday, April 21. Please note that the Museum will be open on Patriots' Day, Monday April 16.

What makes this hand-written document such an exciting piece of American history is the urgency with which it was written. As we read the text, we can sense the shock and concern of its author, Joseph Palmer, a member of the Committee of Safety in Watertown, a near neighbor to Lexington:

To all the Friends of American Liberty, be it known that this Morning before breake of Day a Brigade consisting of about 1000 or 1200 Men landed at [David] Phip’s Farm at Cambridge & marched to Lexington where they found a Company of our Colony Militia in Arms, upon Whom they fired without any Provocation and killed 6 Men and Wounded 4 others.

By an Express from Boston this Moment, we find another Brigade are now upon their march from Boston supposed to be about 1000. [...]

I have spoken with Several Persons who have seen the Dead & Wounded. Pray let the Delegates from this Colony to Connecticut see this they know.

Why does Palmer emphasize the events in Lexington, failing to mention the confrontation in Concord? Perhaps he wanted to spread news that portrayed the colonists as victims in order to garner sympathy for the cause of rebellion? Certainly this was popular strategy of the patriotic colonial press, perfected in broadsheets such as "A List of the Names of the Provincials who were Killed and Wounded in the late Engagement with His Majesty's Troops at Concord, &c."

Or perhaps there is a simpler explanation. The letter was written at 10 o'clock, only one half-hour after the skirmish at Concord's North Bridge. Not enough time had passed for witnesses of the second phase of the Battle of Lexington and Concord to reach Watertown. The encounter between Lexington's militia under Capt. John Parker and the force of 700 or so Regular Army soldiers sent out from Boston was much earlier, at around 4:30 a.m. Palmer has spoken to witnesses of the destruction at Lexington and fears that more unprovoked attacks are to come from the second brigade he has learned is on its way from Boston. His letter spreads the news of unfolding events, the outcome of which he does not yet know.

When you visit the Museum to view the Lexington Alarm letter, don't miss "Sowing the Seeds of Liberty: Lexington and the American Revolution." In the exhibition, you'll find a map that traces how a group of riders spread the alarm throughout eastern Massachusetts. The adventures of some of these riders, such as Paul Revere, William Dawes, and Samuel Prescott, are the stuff of legend. However, countless men rode through the night of April 18 and into the morning of April 19, 1775, to let the countryside know of the unfolding events. Colonial leaders who opposed the Crown, anticipating a move by the British Army, had set a communication network in place. Towns had prepared systems using bells, drums and gunshots to call militia units to gather at specified locations. Throughout April 19th, militias from 23 Massachusetts towns fought in the battles, and many more towns were alerted.

Those curious about how the people of Lexington experienced the beginning of the American Revolution, mark your calendars and and join us for our "Sowing the Seeds of Liberty" gallery talks. We'll be offering two this year, both on Saturday, April 14. Join us at 11 a.m. and 2 p.m. for these free programs that explore of life in this small community where ordinary people took extraordinary actions and shaped history as a result.