A Ritual Bell on View in Curators' Choice 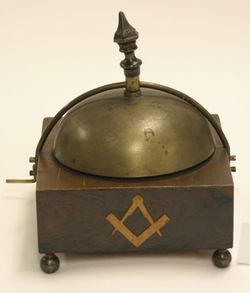 In an earlier post, I wrote about the wonderful glass bell Louis Felix gave to Monitor Lodge in Waltham, Massachusetts.  The object pictured here served the same purpose in Masonic ritual, but is entirely different in materials, mechanism and sound.

You can see this ritual bell, originally used by members of Union Lodge in Dorchester, in Curators’ Choice:  Favorites from the Collection.  From about 1870 or so, lodge members rang this bell to mark a symbolic midnight, or “low twelve,” during a Masonic ritual based on the story of Hiram Abiff’s murder at King Solomon’s Temple.  In one mid-1800s description of the ceremony, the Master approaches the candidate, who lays on the floor, playing the part of the murdered Hiram, and “strikes the hour of low twelve on a triangle or bell...” near the candidate’s head.

When one of the brothers wanted to sound this bell, he turned the small crank on the side of the wooden base.  The crank is still shiny, burnished by the touch of many fingers.  Each rotation of the crank brought a clapper against the side of the metal gong.  A square and compasses cut from a light-colored wood and fixed to the front of the wooden stand the object had a Masonic purpose.  Ball-shaped brass feet and a decorative pewter finial, now a little bent, lend the object panache.

In time, the tradition of marking midnight with a bell fell out of fashion in Masonic lodges.  Brothers replaced the striking of a ceremonial bell with twelve notes played on an organ.  Eventually, bells like this one no longer had a place in the lodge.

This bell does not boast a makers’ mark, and we do not have anything else quite like it in the collection.  It may have been crafted by a brother for Union Lodge or it could have been the product of a fraternal supply house.  Without some kind of documentation, it is not possible to say for certain, but we are curious about who made it.  If you know of a similar object or some other kind of “low twelve” bell, please leave us a comment.

Posted at 10:00 AM in Masonic and fraternal history, Posts by Hilary Anderson Stelling, Ritual props and paraphernalia | Permalink | Comments (6)

Many thanks for your comment on our blog--I'm so glad it helped you solve a mystery! Macoy, the retail/manufacturer name you noted in your description of your bell, was a large Masonic/fraternal supply house active in the late 1800s and the 1900s. In fact, they are still in business today.

Thanks for your comment, Hilary Anderson Stelling, Director of Exhibitions

I am very glad I came across your post regarding this "ritual" bell or gong. I have in my possession an antique bell/gong (one which I had no idea of what it was, or it's purpose) that I recently started to try and identify. The gong/bell I have is labeled (inside the box) Macoy Publishing & Masonic Supply Co., New York, Patented January 22, 1895. The face, much like a clock is numbered 1-12 with a dial that when moved to a number engages the internal mechanisms to chime/gong accordingly. This bell/gong was found in a pile of rubble (which turns out was the remains of a 100+ year old structure) on my family's land in Rural Iowa. While clearing the remains of this structure I found this bell and it's been on a shelf in my home for 20 years. Upon reading your article, I was able to locate the "story" online and would very much like to see this piece appropriately placed.

Thanks for your comment on the blog. I haven’t looked for new glass or mechanical bells, but I can tell you that the antique ones are hard to find!

I have been searching for one of these bells for our Lodge for over a year, and have not found one. If anyone has knowledge of where one can be purchased, please post a reply or email me at the address shown.

Hi--That is great. We don't have any Knights of Pythias ritual bells in our collection, we'd love to know more about the ones you have when you have a chance. Thanks for your comment, Hilary Anderson Stelling, Director of Exhibitions