“The Bible and the People”: A Temperance Story
Registration Now Open! April 28, 2012 Symposium 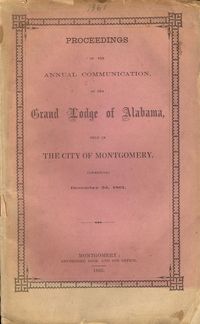 The Masonic Confederate imprints in our collection contain a trove of primary source material related to Masonic activities in the Confederacy during the Civil War. Many of the Grand Lodge Proceedings include "annual returns" of various local lodges that not only list the number of members, but include the names of the men who were members of the lodge. In some cases, like the 1864 Proceedings of the Grand Lodge of Georgia, the individual lodge returns contain a heading that reads "In the Army," listing the members of the lodge that were in the service. These same Proceedings also list the the 19 military lodges that had been chartered by the Grand Lodge of Georgia, lodges created specifically during wartime so that Masons could convene while away from home at war. Owing to the uncertain nature of war, the Proceedings note that the military lodges' "present officers or location are generally unknown at this time." 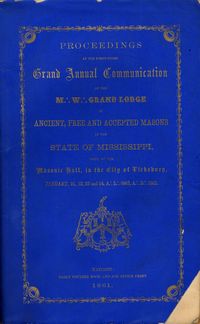 Perhaps it's no surprise to find that within these Masonic Confederate imprints there is evidence of Masonic organizations in Confederate states seceding from organizations in the Union that they had previously belonged to. One example can be found in the Proceedings of the Grand Chapter of Alabama at Two Annual Convocations Held in the City of Montgomery in December 1861 and 1862. Reprinted in the Proceedings is a letter received from S.A.M. Wood, Grand High Priest of the Grand Chapter of Alabama (and later Brigadier General in the Confederate States Army starting in January 1862 ) who was unable to attend the meetings because he was serving in the Confederate Army as Colonel of the Regiment Alabama Volunteers. In the letter, dated "Head Quarters Forces, (Near) Chattanooga, November 29, 1861," Wood writes, in part: 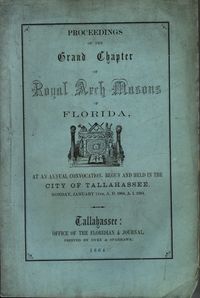 It's not too much of a stretch to see Wood's proposal that his state's Grand Chapter "never unite with any General Grand body" as a sort of Masonic "state's rights" argument, favoring the sovereignty of the state-level Masonic organizations over any national or federal body. 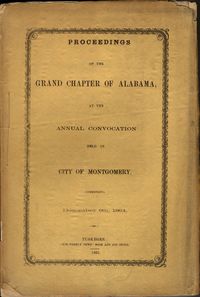 The Civil War is ever-present in these otherwise-often-dry Proceedings. The 1862 Proceedings of the Grand Commandery of Knights Templar and the Appendant Orders of the State of Alabama are all of two pages long, reporting, essentially, that on both days of the annual meeting, there wasn't a quorum present, so they could not have a meeting. Sometimes simply the location of the meeting speaks volumes. The 1863 Proceedings of the Grand Lodge of Mississippi begins:

"On Monday, the 19th Day of January, A.D. 1863, A.L. 5863, the M.W. Grand Lodge of Free and Accepted Masons of the State of Mississippi, assembled in their Forty-fifth Grand Annual Communication, in the Senate Chamber, in the City of Jackson, (their Hall being used as a Hospital for the sick and wounded soldiers of our army)..."

It isn't suprising to read in the 1865 Proceedings of the Grand Lodge of Mississippi, under the heading "Destruction of Property, etc." that "the Masonic temples of our State have been robbed and desecrated by the Vandals of the North." But what is surprising is, reading further along, one finds this: "I am truly sorry, brethren, and regret exceedingly, that our own troops, in some instances have done worse than the fiends of the North," with a further explanation that two Mississippi lodges were broken into by Confederate troops and the contents of the lodge mutilated or stolen.

From top to bottom:
Proceedings of the Annual Communication of the Grand Lodge of Alabama held in the City of Montgomery, Commencing December 2d, 1861. Montgomery: Advertiser Book and Job Office, 1862.

Proceedings of the Grand Chapter of Royal Arch Masons of Florida, at an Annual Convocation Begun and Held in the City of Tallahassee, Monday, January 11th. A.D. 1864. Tallahassee: Office of the Floridian & Journal, Printed by Dyke & Sparhawk, 1864.

Thanks for the question - it's not mundane at all. Organizational structure in Freemasonry can be confusing, especially since there are so many different Masonic bodies. What you are referring to is the Grand Lodge system - which oversees the Blue/Craft/Symbolic lodges in each state. In the U.S. there is, as you indicate, one grand lodge per state, but no national-level grand lodge.

Today, the General Grand Chapter's offices are in Greeenfield, Indiana.

I hope that helps clear things up. Thanks for reading our blog.

Please bear with me if my questions are too mundane as I am not a mason; but where would a General Grand Chapter have been based? I was under the impression that there was no national organization for the masonic lodges, only state Grand Lodges.