“The Bible and the People”: A Temperance Story 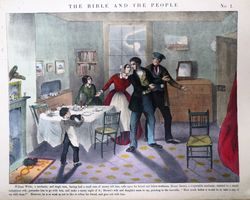 Here at the Scottish Rite Masonic Museum and Library, we’ve got a soft spot for temperance organizations. Most of the material in the collection related to this subject has to do with groups like the Sons of Temperance—which at one point in the 1850s claimed more members than Freemasonry—or the Independent Order of Good Templars, but we also hold material related to the temperance movement in general.

This includes an example of British temperance propaganda, a mid-1800s folio of colored lithographs called, The Bible and the People.  The publisher, Dean and Son of 35 Threadneedle Street, London, described the work as: “A series of plates with descriptions showing the Inestimable Benefits of the Bible, and its great power as a means of effecting present and lasting good.” The publication, with lithographs by an artist named F. Robinson, may have been inspired by the wildly popular and much duplicated eight-part 1847 series, “The Bottle,” by British artist George Cruikshank (1792-1878). 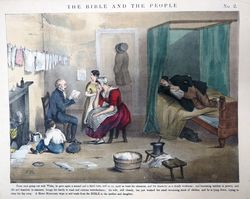 In four plates The Bible and the People tells the story of the respectable Brown family. They are brought low by the bad choices of a weak-willed husband and father but are eventually redeemed through the offices of a visiting missionary, hard work and frugality. The first, and perhaps most charming plate, shows the Brown family in their parlor as they are preparing for tea. A violet and yellow carpet decorates the comfortable room, replete with a cat on the hearth rug, a filled bookcase and table covered with a snowy cloth. At the center of the image, Henry Brown is being lured out of the cozy scene to go “make a merry night of it” with a colleague instead of staying home with his wife and children. 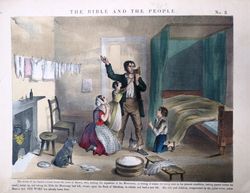 The next illustration shows the family greatly reduced.  Henry lost his job and has become, through going out, “careless in person, and idle and dissolute in manners….” Much of the Browns' furniture is gone, presumed sold to support the family. The floors are bare and ragged laundry hangs to dry in the room. An untidy Henry sleeps in the bed while the children and an exhausted Mrs. Brown listen to a visitor reading to them from the Bible.

Plate number three marks the turnaround. In the center of the image, Henry, arm raised, is swearing, “…upon the Book of Salvation, to reform and lead a new life.” The artist shows the family, including the dog and cat, thanking heaven for this change. The final image portrays the “steady, sober, and industrious” Henry with his family on a path near a church, walking from shadow to sun. They greet the local minister, who compliments Henry on his conversion and on his “family’s cleanly and decent appearance.” 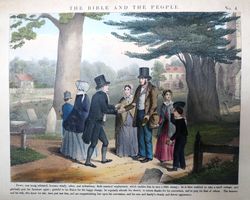 The Bible and the People folio offers a softer version than other visual narratives treating the evils of drink from the time.  In contrast, Cruikshank’s The Bottle tells a remorseless tale of addiction, death, violence and eventual insanity. Cruikshank’s work may have inspired and influenced The Bible and the People but Robinson’s illustrations with Dean and Son's story suggest a cautiously happy ending for those who sober up.

Posted at 10:00 AM in Posts by Hilary Anderson Stelling, Temperance movement | Permalink | Comments (0)