Funny Fashions
“The Bible and the People”: A Temperance Story 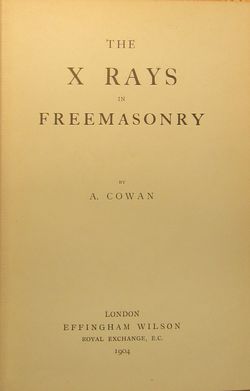 I recently wrote about Auld & Smellie, two eighteenth-century Scottish printers who, it turns out, actually existed and were not, as I had originally suspected, another printer's idea of a practical joke ("old and smelly"). This post takes a look at a book with an author's name that is, in fact, a bit of a practical joke. Let’s put on our x-ray vision glasses and take a look at what’s behind this title page and this author’s name.

Writers, more than printers, are the people that one might first think of as using either pseudonyms or pen names. An interesting - and fairly obscure - example from our collection is one that cleverly plays with the idea of Masonic insiders and outsiders. He is "A. Cowan," the pseudonymous author of anti-Masonic book entitled The X Rays in Freemasonry.

The author's name probably wouldn't make the average reader think twice, since Cowan is an actual surname. But to anyone with knowledge of Freemasonry, "A. Cowan" is a funny play on a Masonic term. Albert Mackey, in his Encyclopaedia of Freemasonry and Its Kindred Sciences, provides a succinct definition of the word "cowan': "This is a purely Masonic term, and signifies in its technical meaning an intruder, whence it is always coupled with the word eavesdropper." Another helpful definition of a cowan is, simply, "one unacquainted with the secrets of Freemasonry." Taking these two definitions together, a cowan may be defined as a non-Mason, intent on discovering the “secrets” of Freemasonry.

Knowing what "a cowan" is then, it should come as no suprise that this is a book written by a self-declared non-Mason, intent on revealing the "truth" about Freemasonry - in this case, proving his thesis that Freemasonry is at odds with Christianity (a perennial anti-Masonic point of view). Who was this eavesdropping non-Mason? Thanks to the catalogers at London's Library and Museum of Freemasonry, I was able to discover that "A. Cowan" was a pseudonym for James J. L. Ratton (1845-1924).  Ratton was a physician and a Catholic with anti-Masonic views. After a stint as Professor of Surgery at the Medical College, Madras (India)and after publishing fairly sober works about salt (including an article with the wonderful title "The Ultimate Source of Common Salt"), Ratton began to study the Bible's Book of Revelation (i.e. The Apocalpyse of St. John) and published a number of books on the topic. On the title page of one book that he published, Ratton also helpfully lists his previously published books, which helps us confirm that Ratton was, indeed, "A. Cowan."

All very interesting, you may be thinking, but what about the strange title of this book? Why x-rays? I think it is a fairly clever analogy to make, since Ratton promises to essentially “see through” Freemasonry and expose what he considers to be its nefarious secrets. By using x-rays as his metaphor, Ratton suggest that he will, in essence, make visible the invisible. Of the hundreds of anti-Masonic works that have been published, this is the only one that I'm aware of that uses x-rays as a metaphor for exposure. The title page shown here, from our collection, is the 2nd edition, published in 1904 - a follow-up to the original published in 1901. Was something going on at the time that would have made x-rays seem especially relevant?

X-rays were all the rage when Ratton's work was first published. In late 1895, just a few years before Ratton's book came out, Wilhelm Conrad Roentgen began investigations that would lead to his discovery of a method for taking x-ray images. The idea of a technique that could see through what seemed solid, and render visible what to the naked eye was invisible, entranced both scientists and the press. By the end of 1896, over 1,000 books and articles had been published about x-rays. In 1901, the same year that The X Rays in Freemasonry was published, the Royal Swedish Academy of Sciences awarded the first Nobel Prize in Physics to Roentgen for his discovery of what became popularly known as the x-ray. And three years later, the same year that the second edition of Ratton’s book was published, an x-ray machine was one of the attractions at the St. Louis World's Fair. While not a great resource for factual information about Freemasonry, The X Rays in Freemasonry is an interesting historical object – combining the old tradition of Masonic exposures with an important scientific discovery that had captured the public’s imagination.