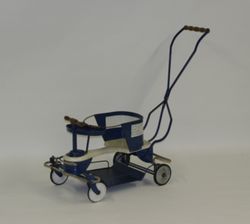 Hi Camille--Thanks for being a blog reader. For questions your Taylor Tot, you might want to inquire at the Taylor Tot facebook page. As well, the Smithsonian Library has copy of a Frank F. Taylor Taylor Tot catalog available for viewing online. Good luck with your research!

Posted by: Hilary Anderson Stelling, Director of Collections and Exhibitions | March 09, 2017 at 03:58 PM

I have a Taylor Tot stroller with all parts.....working well. It is blue, with fenders and from all the pics I have seen, I believe it to be a 1950 model? Questions....how do I date my model....is there a source for me to see the different models....is there more informaiton in general about these strollers / walkers? THX

Dear Donna--Many thanks for your comment. Our Taylor Tot has brought back memories for blog readers and for museum visitors when we have included it in exhibitions. Thanks again for sharing yours.

Posted by: Hilary Anderson Stelling, Director of Collections and Exhibitions | February 23, 2017 at 09:05 AM

Thanks for sharing the photo of the beautiful Taylor Tot! I was born in 1947 and have vivid memories of riding in one. I think my folks got it second-hand, or handed down from a friend or relative. As I recall, ours was black (or dark brown) and cream color, although I haven't seen pics of one that color. When my younger brother was born, I was about 2-1/2 years old, and I remember when he was old enough to sit in the Taylor Tot, I was relegated to the "jump seat" in back. This was not uncomfortable, as I recall--maybe my mom put a cushion of some kind over the Wires. At nearly 70 years old, I often wonder how some memories are so vivid, but I remember feeling very "put out" that I lost my front seat to my little brother, and how hard it was to have a good view of what was in front of us, as I had a hard time seeing over his knitted bonnet! Haha! After I got old enough to explore the streets of Long Beach CA, where we were all born and raised, my brothers and I roamed everywhere. Of course it was a different world then, and as young teens, we were allowed to ride our bikes and take the city bus all over town. I remember one magnificent building in downtown Long Beach, which was the Scottish Rite Cathedral. It always held a mysterious fascination for me, as it was such a lovely piece of architecture, even to my childish eyes. I still live in a nearby town, so maybe I will try and find that building again. Thanks for the memories!

Hello Warren: Thanks so much for sharing your find with us! It sounds fantastic. I'm glad that you enjoyed our blog. Aimee Newell, Director of Collections

I just bought a "new" Taylor Tot stroller! What I just acquired is a Deluxe model with the fenders and brake. It was manufactured March 1952, and the original owner put the new stroller in its box in the attic and never assembled it or used it. So I have a brand new 1952 deluxe stroller in new condition and never restored, with the original tags and assembly instructions. A rare find!

Hello Kara: Thank you for reading our blog and commenting. I enjoyed your note about your family's Taylor Tot. It is always interesting to hear about how these items were used by different families. Thanks again for sharing with us. Aimee Newell, Director of Collections

I had a stroller like that in 1955.It was called Tiffany blue color I believe. My Grandmother had it in the attic for all the grandchildren to use for baby dolls. When my Grandmother passed away my Aunt hung on the wall in her garage for several years. My Cousin tried to sell it at yard sales. No buyers. Perfect for me. My Cousin delivered my Taylor Tot stroller to me a couple years back. I will never part with that stroller . Thank you for the information on its origin.

Hi Bonnie: Thanks so much for reading our blog and for sharing your story! I really enjoyed it - especially about how you used it for your "Spooky House." Thanks again! Aimee E. Newell, Director of Collections

My Cincinnati parents bought a Taylor Tot in 1951. I was 3. They had 5 children, and the last one even used it! It was brown and lightish yellow, as I was the oldest, and remember it well. After we all outgrew it the wonderful thing was still in great shape. We turned it into a 'fun ride' car for our Spooky House we created in our ranch-style house in the basement (lights out, windows darkened, hanging skeletons....we older kids created death-defying turns for the Taylor Tot to swirl the innocent visitor about in. Tnanks Taylor Tot!

Hello Janet: Thanks for reading our blog and commenting. I don't know of any sources for the decals, but perhaps another reader will be able to help. Good luck! Aimee Newell, Director of Collections

I have a Taylor Tot that my parents used for all 3 of their children, starting in 1946. It is in great condition, however, I am looking for the Decals for the Seat and the Front of the stroller. If you know of where I can find them, please let me know.

Hello: Thanks so much for reading our blog and commenting. As I mentioned above, the company was founded in 1921. I did find a reference on the internet to a catalog from the 1930s or 1940s showing the stroller, so I think it would have been possible, although further research is necessary to securely document when the earliest Taylor Tot strollers were made. Aimee Newell, Director of Collections

I was born in 1945 and was told that my parents had a Taylor Tot for me....would that be possible....were they manufactured that early?

Hello Magen: Thanks for reading our blog and commenting. How interesting that your stroller is yellow! As I mentioned in the blog, the company made the strollers in several different bright colors so consumers could choose their favorite. A quick search on Google also turned up one that is pink. I'm not sure about the sticker on yours. It may have been added after the stroller was purchased. Thanks again for reading our blog. Aimee Newell, Director of Collections

Y does my stroller have a deposit sticker on it?
And y is it yellow?

Hi Nadine: Thanks so much for reading our blog and commenting. Unfortunately, it is unethical for Museum staff to comment on the value of antiques (see our previous post about the reasons why - http://nationalheritagemuseum.typepad.com/library_and_archives/2009/07/the-question-we-cannot-answer.html). Maybe another reader will have some expertise to share? Or you could pursue an appraisal at an auction house in your area. Thanks again for reading our blog and commenting! Aimee Newell, Director of Collections