Do You Remember this Stroller?
Who is buried in Grant’s Tomb? 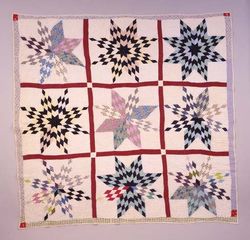 I’ve recently updated the cataloging on some of the quilts in the National Heritage Museum collection, with the help of volunteer Cathy Breitkreutz. When we came across this quilt, which had a photo in our database, but no description, I was dismayed. It was rather poorly quilted at three stitches to the inch and the piecing was not much better, with few points matching precisely.  The fabrics used in the quilt also seemed odd, both in how they were put together and in terms of their patterns. As we filled out a worksheet describing and documenting the quilt, I had trouble understanding why it was in our collection.  I even wondered whether I should consider it for deaccession (removal from the collection).

But, then, I looked in the file and learned that the quilt was donated to the Museum in 1991, after it appeared in the exhibition, "Folk Roots, New Roots: Folklore in American Life." In the file, it was described as a “Freedom quilt.” So, all right, I thought, it was given to someone as a 21st birthday gift, which was my understanding of freedom quilts, based mostly on my knowledge of nineteenth-century quilts. But, I dug a little deeper and discovered that in the 1960s, a “Freedom quilt” had an entirely different meaning – it was associated with the Freedom Quilting Bee, a cooperative that was formed in 1966 in Alabama as a way to allow local women to support themselves and their families through their quilts. The best-known group of these quilts has recently made news as it toured museums across the country in the exhibition, The Quilts of Gee’s Bend.

This particular quilt slightly predates the formal Freedom Quilting Bee, which adopted a charter in March 1966. It was made around 1965 and was one of the first to be sold. The purchasers, Dr. Theodore Klitzke and his wife, Margaret, lived in Alabama at the time, where Dr. Klitzke was head of the art department at the University of Alabama. The quilt demonstrates the graphic patterns and strong color choices that are hallmarks of this African American quilting tradition. Like many of the Freedom quilts, this one includes scraps of black fabric in the pattern.  It is composed of nine blocks in an eight-point star pattern.

After learning more about this quilt, I have a much better understanding of how and why it fits our collection. We look for objects with a story – and this one tells a fascinating one. We also look to build our collection with objects that help us represent and interpret core American values like leadership, ingenuity, and family. The woman that made this quilt exhibited all of these. She used her own creativity to help support her family. And, the Freedom Quilting Bee took a leadership role in its communities to instill pride and participation among the residents, allowing not just the quiltmakers to benefit, but also their friends and families.  While the construction techniques in the quilt may not live up to exacting Victorian-era standards, I appreciate it as a representation of its maker's expressive vision, mixing personal choices and regional traditions.