There Is Rest in Heaven 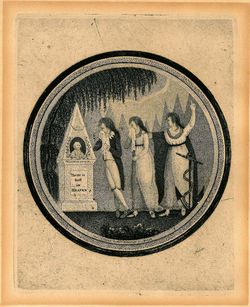 When George Washington died on December 14, 1799, grief at the loss of the first president united many Americans. Although Washington’s funeral was held at Mount Vernon, over the following months, cities and towns throughout the nation staged their own funeral processions and other memorial events. Soon after, works of art—prints, ceramics, and jewelry—told of the new nation’s sorrow at the death of its leader and hero. Although mourning art was popular in Europe and England in the late 1700s, George Washington’s passing precipitated a new market for the genre in the United States.

The National Heritage Museum is fortunate to hold a number of pieces that mark the passing of America’s first president. Many came to us as part of the Dr. William L. and Mary B. Guyton Collection of more than 600 prints and ephemera related to Washington. This collection demonstrates the way that the memory of George Washington has developed over the past 200 years.

The print seen here, on view in our current exhibition, “Curators’ Choice: Favorites from the Collection,” and through our online catalog, was made around 1801, not long after Washington’s death. It is one of the earliest pieces in the Guyton collection. Typical of mourning art of the time, it features sentimental images of a man and a woman, shedding their tears before a monument that features Washington’s portrait and the inscription, “There Is Rest in Heaven.” In this imaginary garden setting, complete with a weeping willow and other symbolic flowers and trees, the allegorical figure of Hope, symbolized by the anchor at her feet, stands behind the mourners. 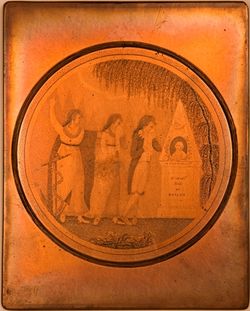 The Museum holds not only two copies of this diminutive print—the image is less than 3½” in diameter—but also the copper plate they were made from. Engraved by Thomas Clarke in Boston, this print is a smaller version of one that is held by a number of institutions, including Old Sturbridge Village, the Fraunces Tavern Museum, and the Boston Athenaeum. The only other copy of the smaller version that I have located so far is at the American Antiquarian Society, which holds both. The larger version is more obvious about its role as a George Washington memorial piece. It includes an inscription below the image: “SACRED to the MEMORY of the ILLUSTRIOUS G. WASHINGTON.” I found it curious that the two versions are mirror images, except for the bust of George Washington on the obelisk, which faces to the right in both prints. There are other, more subtle differences in the figures, tree, and monument as well. Finally, the larger print sports a more ornate decorative border around the central image.

I am intrigued by the existence of two versions of the print, especially since ours is smaller and slightly simpler than the more common one. Did Thomas Clarke think there was enough of a market for both? Which came first? Was ours drawn from the larger, more complex print, or was it a study done beforehand? Did the inscription exalting George Washington help the larger version sell better?

If you have any information about this engraver or these prints, please leave a comment or get in touch with us.