Wings Up or Wings Down?: Using Books to Find An Answer

[Note: this article originally appeared in the November 2010 issue of The Northern Light, the membership magazine for the Scottish Rite's Northern Masonic Jurisdiction.]

Maybe you've just joined the Scottish Rite, or maybe you’ve been a Scottish Rite member for years and have been elected to receive the 33°. You or a family member enthusiastically set out to buy something to commemorate the occasion. Right away, you notice that many of the double-headed eagles are available in either the "wings up" or the "wings down" position. You wonder, "what’s the difference?"  Asking your Scottish Rite brothers, you receive answers that are all slightly different and sometimes contradictory. 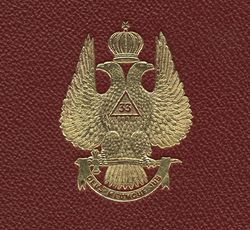 Where can you find a definitive answer?
Call me biased, but I’d say one of your best bets (short of reading this article) is to contact the Van Gorden-Williams Library and Archives at the National Heritage Museum. I’ve had members contact me with this question and here’s how I was able to deliver a definitive answer.

First, I looked at two popular books on Freemasonry. Christopher Hodapp’s Freemasons for Dummies and S. Brent Morris’s The Complete Idiot’s Guide to Freemasonry both address this question. They draw the same conclusion: in the Northern Masonic Jurisdiction, the wings-up version of the double-headed eagle is reserved for Active and Active Emeritus members. (No importance is attached to wing position in the Southern Jurisdiction.) 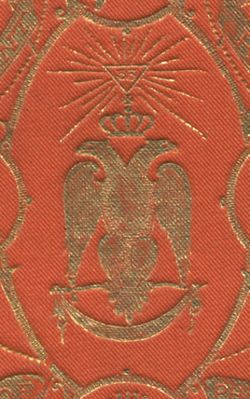 It looks like the Supreme Council’s Constitutions first addressed wing position in 1934, with the description of lapel buttons, which had been formally introduced in 1927. The Constitutions did not describe caps until the 1955 revision and the position of the double-headed eagle’s wings on caps was not addressed until the 1960s.

Double-headed eagles only appear on 32° rings and are described in article 1209 of the Constitutions: "A Sublime Prince of the Royal Secret is authorized to wear a ring, the basic design of which shall be the double-headed eagle." We can infer that the wings should be pointed down.

Looking at the published Proceedings of the Supreme Council, I found that the wings-up versus wings-down question is not new. In a report on the double-headed eagle delivered by the Committee on Ritual and Ritualistic Matter at the 1885 Annual Meeting of the Supreme Council, they concluded "The rising eagle [i.e. wings up] is not improperly represented, and to those who prefer the ascending position there is, and can be, no objection." This indicates that the question was being asked 125 years ago, although the answer back then was different.

In conclusion, unless you are one of the approximately fifty 33° Active Members or an Active Emeritus Member of the Supreme Council, Northern Masonic Jurisdiction, the answer to the question "wings up or wings down?" is this: wings down.