The Adventures of Foxy Grandpa, Freemason. Or Is He? 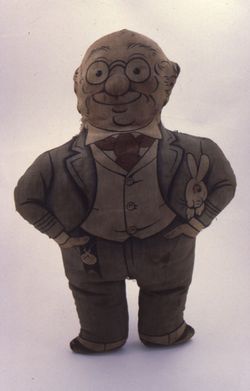 From 1900 to 1918, cartoonist Carl Edward Schultze (1867-1939) drew a popular comic strip about an old man and his young grandsons. Unlike “The Katzenjammer Kids” and other cartoons in which children get the better of their parents and grandparents, Schultze wanted the grandpa to be the smart one. Thus Foxy Grandpa was born. He plays practical jokes on the boys or makes their practical jokes on him backfire.

The comic strip’s popularity led to related products for sale, from toys and postcards to ornaments and doorstops. They also included the doll seen here. Made by Art Fabric Mills Company of New York, the dolls were sold in printed cloth sheets, meant to be cut out, sewn and stuffed. In a December 1904 issue of McCall’s magazine, the dolls were advertised for 25¢. Malted Cereal Company also promoted them. The Museum's doll is now featured in the exhibition "Curators' Choice: Favorites from the Collection."

Carl Schultze signed the cartoons “Bunny”—his childhood nickname—along with a drawing of a rabbit. The doll holds a rabbit, Schultze’s alter-ego, under his arm.

The Museum purchased this doll in 1977 because of the watch fob he wears, which features a square and compasses, a common Masonic symbol. However, no one at the Museum has been able to identify a Masonic connection for the character. We haven't found any evidence that Schultze was a Mason, nor have we seen any references to Masonry in the cartoons. Then a few weeks ago, I discovered a book entitled Foxy Grandpa Rides the Goat for sale. As mentioned in an earlier post, some late 19th- and early 20th-century initiation rituals involved gags, such as “pushing a hoodwinked (blindfolded) candidate around a lodge room on a wobbly-wheeled fake mechanical goat,” one of which we have in the Museum's collection. I thought the book’s title might be a reference to Freemasonry, as did my colleagues in the various collections departments, so we purchased the book. And we were disappointed to find only one reference to Freemasonry in the book:

“Come and ride our goat, dear Grandpa,
We see you’re a mason true,”
Said the boys as they glanced below
At the mortar on his shoe.

Between the watch fob and the poem, it seems clear that Schultze was familiar with Freemasonry. Membership in Masonic lodges was at a peak in the early 1900s, so even the uninitiated likely learned about the fraternity through friends, colleagues, or family members who were Masons.

Schultze's references to Freemasonry are rather subtle, perhaps noticeable only to those who are looking for them. Especially since we have not been able to identify a lodge that Schultze belonged to, these clues seem like his wry joke, in the same vein as the cartoon itself.

If you know anything about Carl E. Schultze's Masonic membership or activities, please leave a comment on this post.

As a museum, we can't comment on values. If you would like to know more about why, please take a look at this blog post: http://nationalheritagemuseum.typepad.com/library_and_archives/appraisals/.

We have a Foxy Grandpa Flip-Flaps illustrated by Bunny. Could you tell me its value?

Dale--Thanks for your comment.
We date the Foxy Grandpa doll in our collection as being made between 1903 (when the Art Fabric Mills Company began producing kits to make these dolls) and 1912. I don't how rare Foxy Grandpa dolls are, but yours is the first I have heard of in awhile!
We appreciate your interest in the museum, Hilary Anderson Stelling, Director of Exhibitions and Audience Development, National Heritage Museum

I have a Foxy Grandpa doll that was my daddy's. My grandmother put it together from the cloth sheets talked about. I was told it was from a flour sack by my mom. What year were they from and how scarce are they?
Dale