New to the Collection: An Apron with a Story 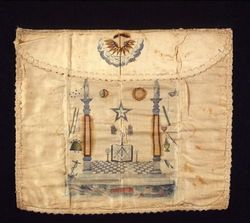 Recently, the Grand Lodge of AF & AM of Illinois generously donated a Masonic apron to the National Heritage Museum.  Regular readers of our blog will know that the Museum is fortunate to have a top-notch apron collection – and that we are always looking to add aprons with interesting stories.  This one does not disappoint!

Although this apron is in only fair condition, it came with a typewritten note that explained, “Apron taken from casket [of President Grover Cleveland] by Mrs. Emily Hurlburt, a first cousin, of Hammond, Ind.  Mrs. Hurlburt gave apron to her son, Mr. Chas. W. Hurlburt.  Mr. Hurlburt died recently and his son, Mr. Wm. Hurlburt not being a member of the craft, wished some one interested to have it, and gave it to Jack Mundinger.”  While it is not unusual for us to receive objects with notes like this, it was exciting to get an apron associated with a U.S. president.  And, we are always wishing we had more history about the objects in our collection – who owned them and when, for example – so this note just added to the interest.

At the same time, even though we love this kind of note attached to an object, we have cultivated a strong sense of skepticism every time we read one – presidential association or not!  So, I did some research and turned up a number of facts that seem to contradict the information in the note.  First of all, Grover Cleveland was not a Freemason, although he seems to have been “sympathetically disposed to the Craft” according to numerous websites.  This assessment seems to stem, in part, from a remark Cleveland made at a banquet following the dedication by the Grand Lodge of Virginia of the monument erected to Washington’s mother, Mary.  Cleveland stated that he “regarded it as his misfortune that he had never been made a Mason.”  There was talk at one time in the Grand Lodge of New Jersey of making him a Mason “at sight,” but it never happened.  So, the odds that Cleveland ever wore or owned this apron seem pretty slim.

So, then I tried to investigate the family connection that is outlined in the note.  Another dead end because, as far as I can tell, Cleveland did not have any first cousins named Emily.  And, then, I found an account of Cleveland’s funeral in the New York Times from June 26, 1908, where it notes that the only relatives expected at the funeral were Cleveland’s sister, Rose, and his nephew, Cleveland F. Bacon.  I suppose that this cousin, Emily Hurlburt, could have taken the apron from the casket at some kind of private family viewing, but it seems unlikely that she wouldn’t have attended the funeral as well.  That leaves aside the question of why Cleveland would have had a Masonic apron in his casket to begin with, since he was never a Mason. 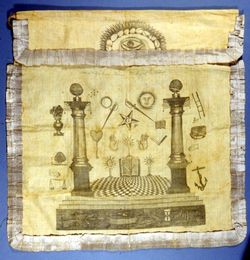 The apron itself probably dates to the 1825 to 1850 period and is printed with a design that seems to resemble one on an apron by Lewis Roberson and Oliver T. Eddy of Vermont (at right), already in the Museum's collection.  If you compare the two, you will notice a number of similar motifs and a similar layout.

Despite the contradictions in the accompanying note and the very slim possibility that this apron ever belonged to President Cleveland, we are pleased to add the apron to our collection.  It represents yet another early 1800s apron design, which will allow us to compare and contrast many other aprons in our collection.  Although the apron's story of presidential associations is probably not true, it still tells a tale that captures our interest!

Hi Belva: Thanks for reading our blog and commenting. We are very happy to be able to care for such a wonderful collection of Masonic and fraternal aprons. Aimee Newell, Director of Collections

Hi! Your blog is good and very informative. The masonic apron that you post symbolizes the rich culture of 18th century. The design depicts the beauty of life.

Hi Richard: I did a very quick internet search and it seems that William B. Hidden was from New Hampshire and served as a surgeon during the Civil War. You might want to contact the New Hampshire Historical Society to see if they can help you learn more about him. The Grand Lodge of New Hampshire may be able to tell you if he was a Mason in that state, as well. Thanks so much for reading our blog and sharing a comment! Aimee Newell, Director of Collections

Hi Jay: Thanks so much for sharing this information with us. I will definitely add it to our file. I'm not sure how directly it relates to the apron, but it does fill in some of the context about President Cleveland's knowledge of Freemasonry. Thanks again for reading our blog and for commenting! Aimee Newell

The following may have nothing to do with this apron, but here is some information from a brother in the historic lodge located in the town of President Cleveland's birth.

From an e-mail I received today:

"The Rev. Grover and friends petitioned for a lodge in Caldwell in 1820. The original lodge was over one of the stores on Bloomfield Ave. The current lodge building was originally an annex to the pastor's home that faced what is now Bloomfield Ave. across the street from the church."

So, we see there is a Masonic connection to the Cleveland family by way of the future president's namesake.