There are Masons in Foxholes
Wings Up or Wings Down?: Using Books to Find An Answer 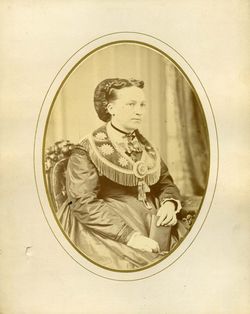 I imagine that, over the next few days, many of our readers will be tipping a glass to the arrival of 2011 – a glass filled with some kind of alcoholic beverage – just as I will. When I set out to write this blog post, I started with a search of the National Heritage Museum collections database, looking for objects associated with New Year’s Day. I ended up settling on this photograph, in part because I enjoyed the irony: we think that the woman was a member of the Independent Order of Good Templars (IOGT), a temperance organization that believed in total abstinence and no license (to sell alcohol).

Unfortunately, we do not know her name, but her IOGT membership was important enough to her that she chose to be photographed – rather formally – in her fraternal collar. On the back of the photo, someone, possibly the sitter, has written “Happy New Year” and signed it with initials.

The IOGT formed in 1850, branching off from the Knights of Jericho, an all-male temperance group in Utica, New York. The Good Templars decided to admit women because it was thought that they would “increase the power of this order for good.” The group grew steadily. By 1907, they numbered 350,000 members in the United States and were also active in Europe, Asia, Africa and Australia. To learn more about earlier temperance groups, see these previous posts.

So, allow me to be the first to wish a happy new year to all of our subscribers and readers, whether you prefer to toast with champagne or soda water. We look forward to many more blog posts, as well as your comments, in 2011.

Starting next week (January 2011), we will post once each week on Tuesdays. If you haven’t already, please consider subscribing to our blog.  Just click on the link at top left – it’s easy! And, don’t hesitate to make a comment or ask a question. We love to hear from you!

Hello: Thanks so much for reading our blog and for commenting. I don't think we can say for sure who this woman is, unfortunately. There were thousands of members of the Good Templars and without even knowing where this woman (in the photo) was from, it's like looking for a needle in a haystack. The photo definitely dates from later in the 1800s (after the 1850s), as well, and was donated to us by a collector, so we don't know where it originally came from, I'm afraid. I do appreciate your enthusiasm - I know how frustrating it can be to look for those little bits of information about your ancestors. Thanks again for your interest in our blog and good luck with your continued research.

I have been working on genealogy on my husband's lines. We have an ancestor whose name is Mary E. Sutherland.(1816-1856) I recently received her obituary sent from West Pittston, Luzerne, Pennsylvania. In there, it states that she was a member of the Good Templars, and "the first to be taken from the Order by death." Is there any change that the "Unidentified Woman" you have in the December 30,2010 issue could be her? She's a bit earlier than your dates(1880-1890), but she was a female member of the Good Templars. I would appreciate any response.