The Talented Charles Buckles Falls
Phony as a $3 Bill 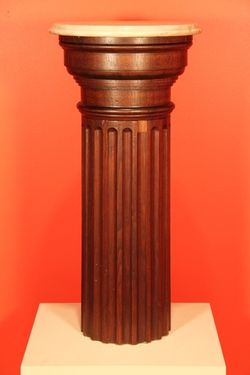 The Museum’s exhibition, "The Initiated Eye: Secrets, Symbols, Freemasonry, and the Architecture of Washington, D.C.," will be coming to a close on January 9, 2011.  We hope you will make plans now to fit in a visit before it is gone.

"The Initiated Eye" presents 21 paintings by artist Peter Waddell, based on the architecture of Washington, D.C., and the role that our founding fathers and prominent citizens--many of whom were Freemasons--played in establishing the city.  The depictions of historical events, activities, and ceremonies carefully explain and demystify Freemasonry for the public.

Approximately 40 objects from the National Heritage Museum collection enrich the exhibition.  One of these objects is a recently acquired Doric column pedestal that was previously used in a lodge in Keene, New Hampshire.  Part of a set of three (the other two show the Ionic and Corinthian styles), the pedestal was probably made in Boston around 1890.

In the exhibition, the pedestal is shown in connection with the painting, Centerpiece of the New Republic (seen at right), which depicts the crypt underneath the U.S. Capitol.  The crypt is located at the dividing point of Washington, D.C.’s quadrants and was built to hold the body of George Washington (1732-1799).  The founding fathers also envisioned an even greater role for the structure.  Inset in the middle of the crypt floor is a brass compass rose, the location for the New Republic’s prime meridian, to replace the one in Greenwich, England.  Planners envisioned that all distances would be measured from this point and that all boundaries for future states would be surveyed from it.  Delicate elliptical vaults transfer the weight of the Capitol’s rotunda onto unfluted Doric columns. 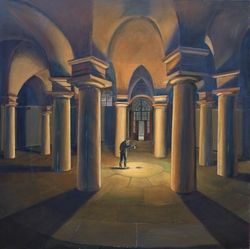 The paintings in the exhibition were commissioned by, and are the property of, the Grand Lodge of Free and Accepted Masons of Washington, D.C., with all rights reserved.  This exhibition is supported by the Scottish Rite Masons of the Northern Masonic Jurisdiction, U.S.A.