"Let's call it Petroleum Lodge!": Or, a guide for naming Masonic lodges
When Do 40 Men Equal 8 Horses?

New to the Collection: Masonic Jewels 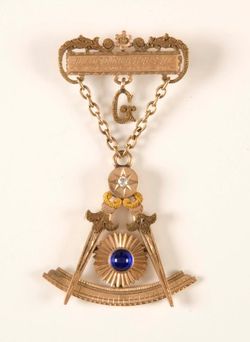 At the National Heritage Museum, opening up the prospective donation of a box of Masonic or fraternal badges and jewels kept for decades often leads to “oohs” and “aahs” of excitement as we find a badge that we’ve never seen before.  Personal items like badges offer an intriguing way to learn about the history of fraternalism, providing a range of insights such as how the style of the badge reflects the era in which it was made or offering a glimpse inside the life story of specific members.

A recent gift to the Museum tells the story of one man’s Masonic career.  Robert Baker visited the Museum a few years ago to present a collection of five jewels that belonged to his grandfather, Julius O. Christensen (1875-1947) of Kansas City, Missouri.  The jewels were handed down in the family, accompanied by an Eastern Star medal owned by Christensen’s wife, Elizabeth.  Christensen immigrated to the United States from Odense, Denmark, coming through Ellis Island in 1893.  After attending Beloit College in Wisconsin, he married Elizabeth Strack in 1900 at St. Stephen’s Lutheran Church in Batavia, Wisconsin.  The couple moved to Kansas City, where Julius was employed by the Independent Electric Machinery Company.  They had one daughter, the donor’s mother, Vera (Christensen) Baker.

Christensen petitioned Ivanhoe Lodge in Kansas City in 1906 and was raised on January 17, 1907.  He served as Junior Steward in 1908 and was Worshipful Master in 1912.  The earliest of this group of jewels is Christensen’s Past Master jewel (seen here at left), from 1912.

Julius Christensen did not rest on his laurels after serving as Worshipful Master of his lodge.  In 1917, he was named Secretary of the Ivanhoe Masonic Temple Company (the Temple was completed in 1921).  Christensen was also active in the York Rite.  One of the jewels (seen below) is dated 1920, the year he became High Priest, and is engraved, “Shekinah Council.”  The familiar all-seeing eye symbol on this jewel is formed with a small diamond.  The symbol takes up the center of a shield with crossed swords behind it.  An elegant archway shapes the body of the jewel and the pin at top is engraved with Christensen’s name. 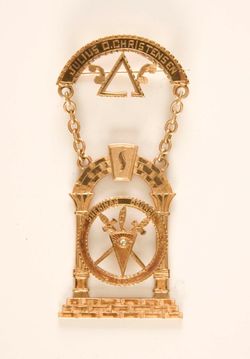 Christensen continued his Masonic service for several decades.  In December 1933, he became Secretary of Ivanhoe Lodge while also filling the post of Recorder of the Kansas City Commandery of the Knights Templar.  Julius O. Christensen died at the age of 72 in 1947.