New to the Collection: Masonic Jewels
A Brittle and Torn Manuscript: Conservation of an early Scottish Rite Patent 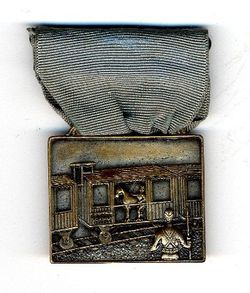 Hello Mr. Swagerty: Thanks so much for the information about the evolution of diagnosing and treating PTSD. And, I'm glad to learn that our post helped you with learning more about your own medal. We appreciate your interest in our blog and your comment. Aimee Newell, Director of Collections

In response to Mr. Robert McKenney, PTSD is equivalent to what was called "shell shock" during the WWI era and then in the WWII era was called "battle fatigue." It was a recognized condition, although treatment was obviously much less advanced than what's available now. So in one respect, they hadn't heard of the term post-traumatic stress disorder, but they did have another name for the same thing. I appreciate that the photo of this medal was posted, as I hadn't had any luck finding out anything about a similar medal I've had for a while. I think I'd gotten it at a flea market in Seattle nearly 30 years ago, along with some other American Legion medals, but I hadn't realized it actually had any connection to the American Legion on its own.
-- THANKS!

Hello Mr. McKenney: Thanks so much for reading our blog and sharing your story with us. I am intrigued to know about another man who had one of these badges. I pretty much shared everything I know about the group - and about our badge - in the post above. It must be exciting to think about your uncle's experiences. Thanks again for posting a comment. Aimee Newell

I photographed a medal just like this with a blue ribbon. He also had a Victory Medal, and 5 campagne bars, on a rainbow ribbon, all enclosed in a red velvet box,that belonged to my uncle, Charles Edwards, who lived in Wilton, Maine into his eighties. He hunted deer with his 8mm service rifle, and was quite successful. He fished on the local lake and was a kind man who never spoke of the war. He was survived by a wife and four children, plus many grandchildren. No one heard about Post Traumatic Stress Diagnosis back in then.

Thanks so much for reading our blog. And, for commenting. We always appreciate the interest. Aimee Newell

Great piece of history!! Thanks for the story.