PURPLE, White and Blue?
"Don't Fire Until You See the Whites of Their Eyes!": Remembering Bunker Hill 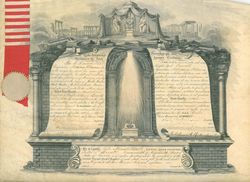 Who was Addison Putnam?  What information can a researcher find from studying Putnam's Masonic certificate?  In this case, the answer is quite a bit of information! For a recent workshop on genealogy and Masonic records, we used a Masonic certificate from our collection in order to demonstrate how one might use a document like this as a starting point for learning more information about the person named on the certificate. In this case, we used a Royal Arch certificate issued to Addison Putnam in 1855 (see image on left).

A quick check of the Massachusetts Grand Royal Arch Proceedings (the annual record of the business of this organization), 1856-1867, mentions Mount Horeb Chapter in the 1850s-1860s, but  does not mention Addison Putnam.  Evidently he was not active at the state level of Royal Arch.

Since Mount Horeb is a Royal Arch chapter, we know that Putnam must have joined his local (i.e. Blue/Craft/Symbolic) lodge first, before proceeding to the York Rite. In that case, time for a call to Cynthia Alcorn, Librarian at the Grand Lodge of Massachusetts, to see if she had a membership card for Putnam. She does!  Putnam's membership card gives his local lodge as Ancient York Lodge (where he was a member from 1855-1868, until he demitted), and later Kilwinning Lodge (1867-), both meeting in Lowell.  The card also establishes Putnam's death date as April 28, 1905.

A search of the Library's online catalog tells us that we have a lodge history called By-laws And List of Members, Kilwinning Lodge, 1866-1907.  Exactly the time period we are looking for!  In a list of former members of Kilwinning Lodge is Addison Putnam's name.  With this information confirmed we move on.

Next we go to the database Ancestry.com and put in the information that we know: name, place lived, and death date.  Ancestry.com [a subscription database] yields loads of information.  First I try the Federal Census material from 1860, then 1900.  I find Putnam's birthdate, November 1824, that he lived in Lowell, the members of his household (Hannah B., wife, children, Lilias, Addison, and Frank, plus two maternal relatives, Emily and Matilda Puffer).  I find that he married Hannah in 1848.  By 1900, his children are grown and not living with him except for one son, Addison Putnam, Jr. and his wife.

Next I check the New York Times obituaries.  Putnam's obit shows up in the April 29, 1905 Times, with his death date listed as April 28, 1905.  Now I know for sure that I am dealing with the same man that the Masonic certificate was issued to.  However, the New York Times does not mention that Putnam was a Mason.

I check Lowell Sun newspapers and find out his home address which was Nesmith Street in Lowell from the 1894 issue.  In another issue of the Lowell Sun from 1938, I find that Addison Putnam was a very prominent citizen of Lowell.  He had been given the title of "Grand Old Man of Lowell" and the title was just being passed on to someone new.

Finally, I check directories from Lowell, 1889-1890 and have some important information confirmed.  The Federal Census form simply read "merch. clothing" [perhaps merchant] for occupation.  Putnam was, in fact, a clothier in Lowell in 1889 and his business was located on Central Street and was named Putnam and Son. This directory confirms his home address as well.

Our quest is successful!