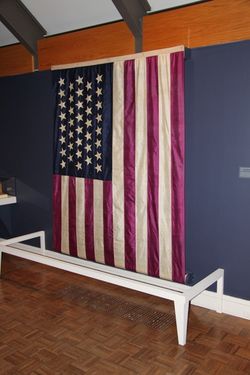 One of the eye-catching objects in the exhibition, The Initiated Eye: Secrets, Symbols, Freemasonry, and the Architecture of Washington, D.C., is also quite unusual.  The large, 38-star American flag has a standard blue canton, white stars, and white stripes - but it also shows purple stripes.  The flag measures approximately 68 by 118 inches.

Samuel C. Carter was born in 1853 and joined Harlem Lodge No. 457 in 1894.  Five years later, in 1899, he affiliated his membership with Franklin Lodge No. 216, which had recently changed its location to Washington Heights.  According to the U.S. Census for 1900, Carter worked as a banknote engraver.  He lived in Manhattan in 1900 with three sons, Robert, William and Samuel Jr., and one daughter, Grace.  In 1910, Carter served as Master of Franklin Lodge, although if he used the flag during this term, it would have been outdated because of the number of stars.

According to Henry W. Coil’s Masonic Encyclopedia, many Grand Lodges authorized lodges “to make formal introduction and presentation of the National Colors at each meeting,” after World War I.  While Samuel C. Carter died on January 30, 1919, shortly after the end of the war, his son, Samuel Jr., was raised a Master Mason after his father’s death on March 24, 1919.  Perhaps he used the flag in his lodge to honor his father.

Do you know of other examples of American flags with Masonic symbols or colors?  Do you know anything more about the Masonic careers of Samuel Carter Sr. and Jr.?  We would love to hear from you!

The Initiated Eye will be on view through January 9, 2011.  The paintings in the exhibition are the work of Peter Waddell, and were commissioned by, and are the property of, the Grand Lodge of Free and Accepted Masons of Washington, D.C., with all rights reserved.  This exhibition is supported by the Scottish Rite Masons of the Northern Masonic Jurisdiction, U.S.A.

We thank Thomas M. Savini, Director of the Chancellor Robert R. Livingston Masonic Library of the Grand Lodge of New York for sharing membership records about the Carters and lodge history on Franklin Lodge No. 216.