"Don't Fire Until You See the Whites of Their Eyes!": Remembering Bunker Hill
An Unfinished Apron

Freemasons in the Civil War 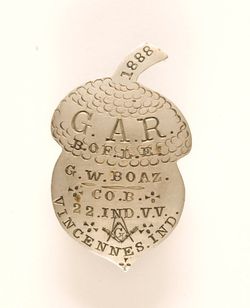 Recently, the National Heritage Museum was given two silver Civil War identification badges.  The story goes that soldiers wore these to identify themselves in case of injury or death, but also to convey their status as Masons.  Numerous anecdotal stories of northern and southern Freemasons who were injured or captured during the Civil War, but received aid and comfort from Masonic brothers on the opposing side, have been told since those battles.  Being somewhat of a skeptic, I always wondered whether these stories were true.

Now, the question has been answered.  In his recently published book, The Better Angels of Our Nature: Freemasonry in the American Civil War, Michael A. Halleran explores Freemasonry during the Civil War.  Halleran found sufficient evidence in letters, reminiscences and regimental histories to provide a documentary background for objects like these badges.  As a historian and curator, I feel much more confident in sharing these items with our visitors, using them to tell the story of Masons during the Civil War. 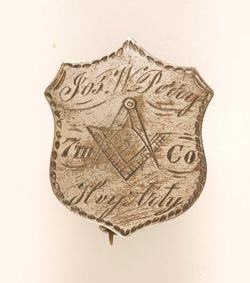 Both of these examples show the Masonic square and compasses symbol, signifying reason and faith.  If you look closely at the acorn-shaped one, you can see that the year 1888 was added to the “stem” well after its presumed initial use in the 1860s.  We think that the “G.A.R.” and “B. of L.E.” initials were also added later – they indicate the original owner’s membership in fraternal groups the Grand Army of the Republic and the Brotherhood of Locomotive Engineers. 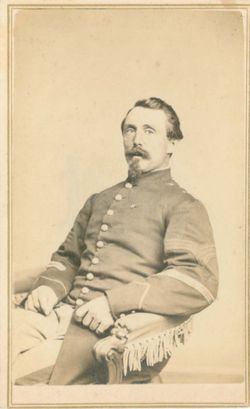 Also in the collection, we have a number of carte-de-visite photographs of men in their Civil War uniforms.  Most of these photos show the subjects with a Masonic symbol or badge on their chest.  Indeed, the cover of Halleran's book shows two photographs from an album in the collection of the Grand Lodge of Masons in Massachusetts (now housed at the National Heritage Museum).  The men in these images wear their military uniforms and a Masonic pin.  Both men were members of the 43rd regiment, Massachusetts Infantry, and of McClellan Army Lodge No. 6, which was chartered by the Grand Lodge during the war.

Another example, the CDV shown here from the Museum's collection, is a portrait of Albion Wesley Lewis (1828-1903) of Westfield, Massachusetts.  He wears a square and compasses pin on his coat (although it is hard to make out).  Indeed, the membership records at the Grand Lodge of Massachusetts tell us that Lewis was a member of Mt. Moriah Lodge in Westfield and that he received the first three degrees in June 1861.  Various biographical sketches fill in details of Lewis’ life.  He went to California during the gold rush in 1849 and stayed there for four years.  When he returned, he married Caroline H. Loomis in 1855 and established himself in the business of manufacturing whips.  During the Civil War, Lewis was a member of the 46th Regiment, Massachusetts Volunteers, and of the 30th Company Unattached Artillery.  After the war, he went into the clothing business, forming the partnership Loomis, Lewis and Company.  Albion Wesley Lewis died on March 28, 1903.

Thanks for your comment - I'm glad this post was of interest. And, I am intrigued to hear about the photo you have of Rev. William Mack Lee - how fascinating! We do have some items in our collection and in the Grand Lodge of Massachusetts collection that relate to army lodges chartered by the GL of Massachusetts. Please email me at anewell@monh.org if you would like to know more about those objects. My colleague, Jeff Croteau, from our Library will be getting back to you about your question on Lee. Thanks again for your interest!

Any data on Rev. William Mack Lee, a freed Black aide/body servant of Robert E. Lee. Have a albumen photo of him in Master Mason attire. Lee was a mason at Alexandria Lodge & anything on army lodge activity?