Sharing Comments on The Initiated Eye
Are the National Parks Better in Stereo? 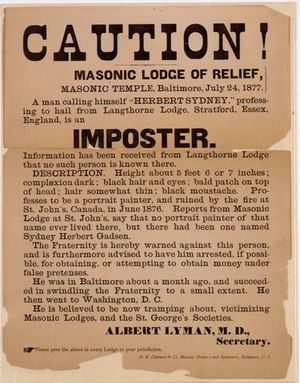 Our blog turns two years old this week. In celebration of that anniversary, we invite you to take a look at our very first post, which discusses early 20th century Masonic impostors. While you're at it, also be sure to take a look at our follow-up post from a year ago, Masonic Impostors Redux: "sleight-of-hand and song-and-dance man."

Keeping with that theme is today's object - a broadside that was sent out to local Masonic boards of relief in 1877, warning them of a man posing as a needy Mason, and attempting to take advantage of Masonic charity. It is, essentially, a wanted poster for a Masonic impostor.

The broadside warns of a man going by the name "Herbert Sydney," and claiming to be an English Mason, supposedly left destitute by the huge fire in St. John's (Quebec) in June 1876. As the poster reports, the Masonic Lodge at St. John's reported that they knew of no Mason by that name.

As we discussed in earlier posts, the success of Masonic impostors during the late 19th and early 20th centuries relied on staying one step ahead of Masonic relief boards spreading the word. This broadside mentions that "Herbert Sydney" swindled relief boards in Baltimore and that he then went to Washington, DC. It's unclear where he went next, but no doubt he was hoping to reach Masonic relief agencies in cities that had yet to receive this "Caution!" broadside.

The broadside closes by warning that the man going by the name of Herbert Sydney is, like many Masonic impostors at the time, thought to be "tramping about, victimizing Masonic lodges."