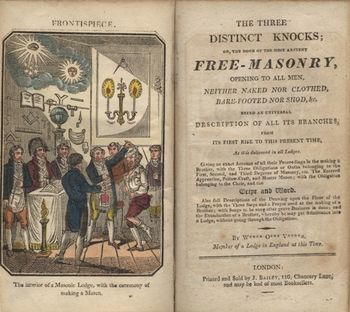 Masonic ritual exposures from the collection of the Van Gorden-Williams Library and Archives are just one of the many examples of anti-Masonic materials that will be on view in the reading room through May 15 in the exhibition Freemasonry Unmasked!: Anti-Masonic Collections in the Van Gorden-Williams Library and Archives. In selecting objects for the exhibition, I was looking at our collection of ritual exposés and thinking about this interesting and complicated corner of anti-Masonry.

Steven C. Bullock, in his essay “Publishing Masonry: Print and the Early American Fraternity” calls Masonic ritual exposés “the first important Antimasonic genre.” The first ritual exposure in book form – Samuel Prichard’s Masonry Dissected – was printed in London in 1730. Prichard’s book, while an exposure, is an important document for historians as it provides the earliest known description of the Master Mason degree. To the historian, this type of documentation is invaluable. To the Mason, however, the idea of a ritual exposure is perhaps worrying at best, providing evidence of a betrayal of trust. But what about the historian who is also a Mason?

Arturo de Hoyos, who is both a historian and a Mason, addresses this tension in the introduction to his book Light on Masonry: The History and Rituals of America’s Most Important Masonic Exposé. De Hoyos writes: “The great secret of Masonic historians is that many of us have a love affair with ritual exposures. Like other affairs of the heart, it is exciting, but it may also be a love-hate relationship. On the one hand, they are the product of betrayal and are ipso facto suspect. On the other hand, they present the possibility of authenticity and may teach us a great deal about the evolution of the ritual.” In other words, what was once the product of betrayal may now be carefully used by historians to trace some of the changes and developments of Masonic ritual.

Masonic ritual is taught “mouth to ear,” although some jurisdictions also provide officially sanctioned ciphers or other memory aids that assist in memorizing ritual and also help insure uniformity in ritual work. As Masons who have visited other states or countries can attest, Masonic ritual is not exactly the same from jurisdiction to jurisdiction. Likewise, not all men’s memories are the same and so it’s only natural that some candidates have wished for a printed version of the ritual to assist them. Unsurprisingly, in the absence of officially-sanctioned printed rituals, exposures sometimes served that role, especially in the late-18th and early-19th centuries.

One book illustrates this point well. Jachin and Boaz, a ritual exposure first published in London in 1762, was reprinted almost thirty times in the United States from 1793 to 1827. Although considered a ritual exposure, the book’s largest audience was likely those named on the book’s title page: the “New-Made Mason,” and “all who intend to become Brethren.” As Stephen C. Bullock has pointed out, “Although curious onlookers probably picked up the pamphlet on occasion, only an audience of brothers seeking to learn the rituals better could have encouraged American printers to reprint the pamphlet twenty-eight times between 1793 and 1827.”

From the point of view of the librarian, Jachin and Boaz is a book that complicates the question of whether a book should be classified as anti-Masonic or not. On the one hand, exposing Masonic ritual appears to serve the intention of betraying and antagonizing the Fraternity and can easily be thought of as anti-Masonic. On the other hand, a book like Jachin and Boaz is not sensationalist in nature and, one might argue, served a need for the Fraternity – both by helping Masons learn ritual, as well as potentially attracting the attention of men who became interested enough to join the Craft. Not all ritual exposures are the same, though, and some – if not most – were clearly printed with intentions hostile to Freemasonry.

Three Distinct Knocks and Jachin and Boaz: With an Introduction and Commentary by Harry Carr. Bloomington, IN: Masonic Book Club, 1981.