New to the Collection: Mourning McKinley
Say Hello to Billy the Patriot Mouse on Patriot’s Day!

The Lexington Alarm Letter - on the web and on exhibit! 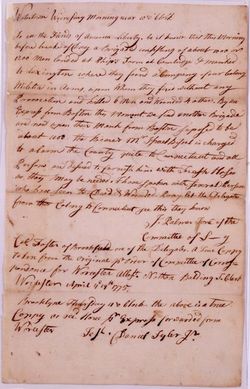 Once a year, to celebrate Patriot's Day, the Museum is proud to display the Lexington Alarm letter, written the morning of April 19, 1775 to alert the colonies that war with the British had begun. The Lexington Alarm letter will be on view in the lobby of the National Heritage Museum from April 17-25, as part of the festivities surrounding Patriots Day, a Massachusetts holiday that commemorates the Battles of Lexington and Concord each year on April 19th. Be sure to stop by the museum and check out this exciting piece of American history. And, of course, you'll want to view our long-term exhibition, Sowing the Seeds of Liberty: Lexington and the American Revolution to learn more about Lexington's role in the American Revolution.

Whether you're able to stop by the Museum or not, be sure to check out our two blog posts from last April about the Lexington Alarm letter. The first post explains more about what the letter is and the role that it played during the 24 hours after the Battle of Lexington. The second post - "Quite to Connecticut": (Google)mapping the Journey of the Lexington Alarm - follows the ride of Israel Bissel (using Google Maps!) on April 19-20, 1775 as he spread the news of the Battles of Lexington and Concord.

Below is a transcription of our Lexington Alarm letter. The verso of the letter (not shown here) reads: "To Christopher Leffingwell Esq. or either the Committee of Correspondence Norwich."

To all the Friends of American Liberty, be it known that this Morning before breake of Day a Brigade consisting of about 1000 or 1200 Men landed at Phip’s Farm at Cambridge & marched to Lexington where they found a Company of our Colony Militia in Arms, upon Whom they fired without any Provocation and killed 6 Men and Wounded 4 others. By an Express from Boston this Moment, we find another Brigade are now upon their march from Boston supposed to be about 1000. The Bearer Mr. Israel Bissel is charged to alarm the Country quite to Connecticut and all Persons are desired to furnish him with Fresh Horses as they may be needed. I have spoken with Several Persons who have seen the Dead & Wounded. Pray let the Delegates from this Colony to Connecticut see this they know.

J. Palmer, one of the
Committee of S-----y [i.e. Safety].
Col. Foster of Brookfield one of the Delegates. A True Coppy taken from the original p[er] order of Committee of Correspondence for Worcester. Attest. Nathan Balding T[own] Clerk
Worcester April 19th 1775.