Some Recent Library Acquisitions on Freemasonry and Fraternalism
The Lexington Alarm Letter - on the web and on exhibit!

New to the Collection: Mourning McKinley 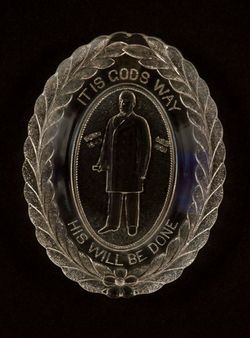 Commemorative glass and ceramic platters, mugs and pitchers were popular during the late 1800s and early 1900s – particularly those bearing the likeness of one of our presidents.  But, this glass platter, which was donated to the National Heritage Museum in 2008, the gift of Robert and Edith Zucker, seemed somewhat eerie to me given its inscription, “It is God’s way / His will be done.”

A quick search of the life dates on the platter, “Born 1843 / Died 1901,” confirmed that the man depicted is William McKinley, 25th president of the United States.  McKinley was assassinated while attending the Pan-American Exposition in Buffalo, New York.  So, I initially attributed the rather severe verse to vestiges of somber Puritanism or to Victorian mourning ideals.

However, additional research turned up a far more pertinent explanation for the words on this commemorative platter.  According to the New York Times on September 14, 1901, McKinley’s last words as he died that day were “Good bye.  All good bye.  It is God’s way.  His will be done, not ours.”

Born in 1843 in Niles, Ohio, McKinley became a teacher until the Civil War broke out.  He enlisted in the Union Army, eventually achieving the rank of brevet major.  After the war, he became a lawyer in Canton, Ohio.  He also served in the U.S. House of Representatives and held two terms as governor of Ohio.  In 1896, McKinley was elected president of the United States, and was elected to a second term in 1900.  Unfortunately, his life was cut short on September 6, 1901.  On that day, despite the presence of Secret Service agents, anarchist Leon F. Czolgosz shot McKinley while he was shaking hands at a public reception at the Pan-American Exposition.  Despite quick medical attention, gangrene set in around McKinley’s wounds and he died on September 14, 1901.

In addition to his distinguished political career, William McKinley was a Freemason.  He received the first three degrees from Hiram Lodge No. 21 in Winchester, Virginia, during his Civil War service.  After the war, McKinley affiliated with Canton Lodge No. 90, Canton, Ohio, later becoming a charter member of Eagle Lodge No. 431 in Canton, Ohio.  He was also active in Royal Arch Masonry and the Knights Templar.