Does This Building Ring a Bell?
Which Way to the Masonic Lodge? 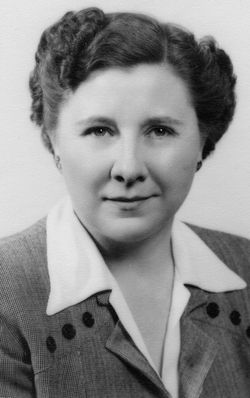 Dorothy, shown here ca. 1950, lived in Olean, New York with her husband Theron C. Cleveland until 1967 when he died.  In 1970, she married Roy Brown.  Dorothy was a member of St. Stephen's Episcopal Church where she served on the Altar Guild.  She also enjoyed baking and bird watching.  She was a former member of Order of Eastern Star, but chose Order of Amaranth for most her activites. (For an explanation on the relationship between OES and Amaranth, check out our earlier post on the topic.)

She participated in her local court, Olean Court, No. 19.  The photograph below is from the 50th anniversary celebration of the founding of Olean Court, held in 1955.  Dorothy (a.k.a. Dolly) is in the center, wearing a white dress and long white gloves.  The group stands below the symbol for the Order of Amaranth, the crown and sword with amaranthus leaves surrounding it.  As taught to Order of Amaranth members, the amaranthus symbolizes the fraternal bond of friendship and stands for distinction and honor.

During the same year as the Olean Court anniversary, 1955, Dolly was elected to serve as Grand Associate Conductress (Matron) of New York, Order of the Amaranth. During 1958-1959, she served as Grand Royal Matron of New York.  After holding this post, Dolly continued to participate in Amaranth at the state level, performing much committee work.  Her next role was that of Chairman of the Rules and Regulations Committee, Grand Court of New York in the 1960s.  The Grand Court of the Amaranth in New York still exists today.

As her papers show, Dolly reached the highest office in Order of Amaranth, that of Supreme Royal Matron for the United States, an office that she held during 1971-1972.  While she served as Supreme Royal Matron, Dolly did quite a bit of traveling in this capacity and presided over various conventions. 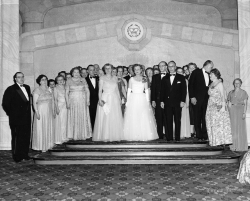