American Anti-Masonry in 1880: Edmond Ronayne and the National Christian Association
A clock fit for a king 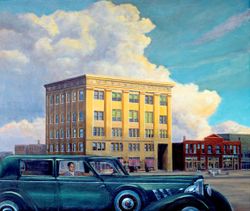 The National Heritage Museum’s exhibition, "The Initiated Eye: Secrets, Symbols, Freemasonry, and the Architecture of Washington, D.C.," includes the painting seen here, The Good of Masonry Entirely at Heart.  The painting depicts the Prince Hall Grand Lodge of the District of Columbia, which oversees African American lodges in the district.  Located at 1000 U Street, N.W., the building was designed by Albert Cassell (1895-1969), noted African American architect, in 1922.  But Prince Hall Freemasonry actually got its start in Boston.

A leading citizen in Boston’s African American community, Prince Hall (1738-1807) was an active Methodist who campaigned for schools for black children and created a benevolent society.  Drawn to Freemasonry’s values and opportunities, the former slave tried to join Boston’s lodges in the early 1770s, but was denied membership.

Hall and fourteen other African Americans who had been rejected by the established Boston lodges turned to a Masonic lodge attached to a British regiment stationed in the city.  Initiated in 1775, Hall and his Brothers met as members of the British lodge until the Revolutionary War ended.  In 1784, Prince Hall petitioned the Grand Lodge of England to form a new lodge on American soil.  The governing body granted his request, creating African Lodge No. 459.  When Prince Hall died in 1807, African American Masons chose to give their fraternity his name to distinguish it from the white lodges that excluded blacks. 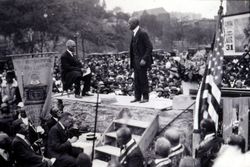 "The Initiated Eye" exhibition presents 21 oil paintings by Peter Waddell based on the architecture of Washington, D.C., and the role that our founding fathers and prominent citizens – many of whom were Freemasons – played in establishing the layout and design of the city.  The exhibition is supplemented with approximately forty objects from the National Heritage Museum’s collection.  In the show, the painting of the D.C. Prince Hall Grand Lodge building is juxtaposed with the photograph seen here.  Taken by noted photographer James Van Der Zee (1886-1983) in 1930, it shows a cornerstone laying for a Masonic temple in New York City.