Masonically Inspired: Order of United American Mechanics and the Knights of Pythias
A Letter Home from Mecklenburg, Virginia, 1849 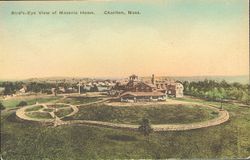 During the late 1800s, the Grand Lodge of Masons in Massachusetts began to consider establishing a home for sick and aged Freemasons and their families in the state.  The Grand Lodge was motivated by larger social trends.  Prior to the Civil War, caring for the sick and the elderly was a family's responsibility.  After the war, concern for the problems of old age increased.  Families were not working together on their farms as much anymore, and more people began working outside their homes for pay, making the care of the sick and the old difficult.  Between the Civil War and World War I, the number of homes for the aged increased, retirement pension programs were established, and old age annuities began to be offered by insurance companies and by fraternal and mutual benefit societies.

By early 1911, the Grand Lodge had raised $148,290 from 30,000 Masons (about half of the state’s membership) and felt that they had sufficient funding to open the Home.  The dedication took place on May 25, 1911, with a crowd of 3,000 in attendance.  The Grand Master addressed the crowd, reminding them that “the establishment of the Home to-day is the result of no recent inspiration, but has been the growth of years.”  Over the next 100 years, the Charlton Masonic Home grew, with room for more and more beds added over the decades.  Known today as the Overlook Masonic Health System, the Home continues to flourish.