Another mystery in need of solving: "Tadmore 77"
The Charlton Masonic Home

Masonically Inspired: Order of United American Mechanics and the Knights of Pythias 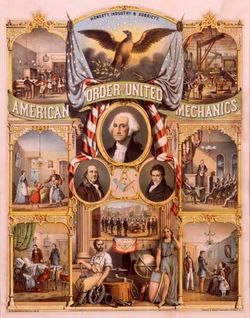 By 1900, over 250 American fraternal groups existed, numbering six million members.  Many of these groups looked to Freemasonry for inspiration in creating their rituals, their symbols and their structure.  Two of these groups – the Order of United American Mechanics and the Knights of Pythias – show Masonic influence in the colorful prints reproduced here.  The National Heritage Museum collection includes hundreds of prints like these, which are invaluable sources to study Masonic and fraternal history, as well as American history and culture.

Founded in Philadelphia, Pennsylvania, in 1845, the Order of United American Mechanics was a patriotic, social and benevolent fraternity that aimed to help native-born Americans find employment, and to assist members’ widows and orphans and members who could not work.  The group’s mission reflected the resentment that some American workers felt toward immigrants who were hired at lower wages.  Its emblem, shown at the print’s center (at left), consisted of a square and compasses – similar to the well-known Masonic symbol – around the arm of labor. 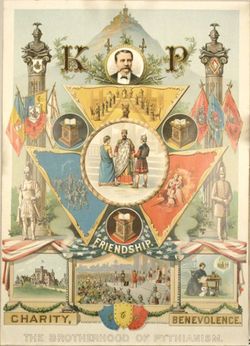 The print at right is titled The Brotherhood of Pythianism.  The Knights of Pythias was founded in 1864 in Washington, D.C., to renew brotherly spirit in the wake of the Civil War.  Founder Justus H. Rathbone (1839-1889), possibly the man depicted at the top of the print, was a Freemason.  Like Freemasonry, the Knights of Pythias awarded three degrees through rituals.  However, the Knights’ rituals followed the story of the friendship of Damon and Pythias, rather than the building of King Solomon’s temple.  This print prominently displays the group’s motto, “Friendship, Charity, Benevolence.”